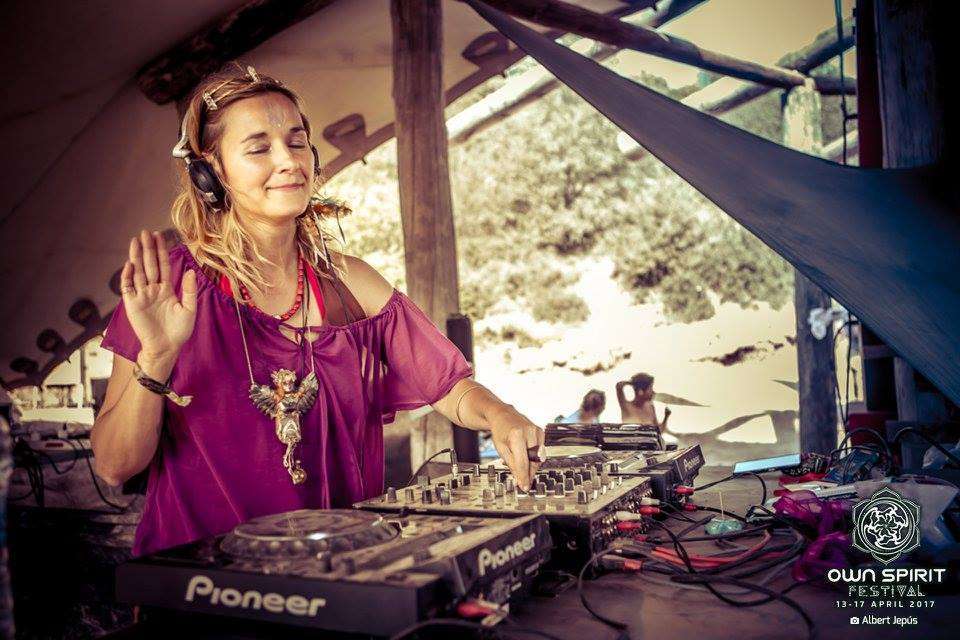 In-between those European festivals Gaby will travel across to Africa, where the sun is out in full force in South Africa's neighboring country, Mozambique.

Djane Gaby from Slovenia has been a regular feature at some of the biggest festivals over the years with previous bookings at Boom & Ozora, plus upcoming sets at two of Europe’s top summer festivals this year; Psy-Fi in the Netherlands and FLOW Festival in Austria. In-between those European festivals Gaby will travel across to Africa, where the sun is out in full force in South Africa’s neighboring country, Mozambique. We decided to have a chat with Gaby, ahead of her set at Mozamboogy 2016.

Psymedia: Hi Gaby! You’ve been involved with music from a young age. Do you remember the moment you fell in love with it? How do you decide to become actively involved?

Djane Gaby: Hello! Firstly, thank you for inviting me to chat. As you’ve mentioned, music has been around me from an early age. However, during my teenage years, at the start of the 1990’s, I regularly attended an electronic club in Ljubljana (Slovenia), my hometown. It [the club] became my second home. From there, I had the opportunity to explore different styles such as electro, acid trance & techno.

Years later, my boyfriend at the time (who became known as international techno producer Umek), was always skipping school to practice on his turntables. We must have been about 16 or 17 years old at the time. Months later, I had a realistic dream in the night, picturing myself on a big stage, playing for thousands of people. The next day I asked him to show me how it all works. He basically just pointed to the turntables, so I basically went on my own journey to explore. Today, I am grateful for finding my own feeling and path. We then started to organise some of the first rave and techno parties in our country [Slovenia], and I became the first female electronic DJ in Slovenia. Of course, at the time, we just played on vinyls. From there, word spread and the bookings started to roll in.

Psymedia: You’ve since moved from Slovenia. What was the scene like at the time? What’s the psytrance scene like in Slovenia nowadays?

Djane Gaby: As I mentioned, I contributed to the scene in Slovenia and I’m happy and proud to be from there. I’m happy to have been there from the start [of the scene] and and to have planted some seeds. At that time, I formed an organisation called World of Trance, regularly organising trance parties with international artists. The scene started to grow. I also ran a radio show under the same name, to inform even more people about the music and events abroad. Of course, the music has progressed first from the techno/acid times at the end of the 90’s to a more hypnotic trance and psychedelic influence later on. So, people started to become more and more of a real crew of trance lovers. After some years, my international bookings increased and I moved to Vienna, Austria. Slovenia is still a small country, with not many options, but today smaller events in underground clubs and open airs take place. The love for psytrance exists!

Psymedia: You’ve got a new compilation out entitled Healing Lights Volume 4. The series began several years ago in 2007, jumping various labels. Does the series have a particular theme or concept?

Djane Gaby: Yeah, very proud of this baby! I basically have, at the moment, 2 compilations out. The one mentioned, Healing Lights v4, has the concept of bright, melodic, positive & uplifting progressive trance with artists like Ascent, Norma Project, Sonic Wave Control, Suduaya, & E-Mov. I tried to keep up the emotional part of the trance music!

Psymedia: How does the other compilation entitled, Spiral Lights, differ?

Djane Gaby: Spiral Lights is more of a psychedelic trance compilation, with artists such as S-Range, Sonic Species & Spiral Architekt. But I keep my female touch, positive vibe and unique groove in it as a whole atmospheric psytrance journey! Both compilations are out on Spiral Trax and can be purchased on Psyshop and Beatport. Definitely not my last projects!

Psymedia: Both compilations came out on Spiral Trax Records. Why did you decide to go with them? What makes a good record label?

Djane Gaby: Well, I am now an Ovnimoon Records artist, and Spiral Trax is a sub-label of the same owner, if I can say so. Basically, it stays in the same house. But since early on in my career, I was a huge fan of the label, around 2011. At that time, it was run by DJ Anti from Sweden. It had amazing artists like Atmos, Noma, S-Range & Logic Bomb. Many years later it kinda folded, which was a shame. In the last 2 years, it has been rebuilding with a new owner. So all my support for it! A good record label is one who releases quality sound, but supports the artists on the label too. It doesn’t matter if the label is big or small. If I am able to choose, I go with my feeling and ears!

Psymedia: You’ve dabbled in production; working with the likes of Champa, Pulsar, Thaihanu & Hux Flux to name a few. Are there any plans to release original work on a consistent basis or a live set?

Djane Gaby: Yeah, I love different projects and to express my creativity in many ways. That’s me! All those collaborations were super fun and there will be more on the way. However, as every producer knows, producing takes a lot of time if you want to make some proper tunes, as opposed to just mass production beats, which I am not interested in. At the moment, I’m really traveling a lot due to my bookings, but who knows what the future will bring. I might settle down in a cozy studio and bring it on!

Psymedia: You’ve got Mozamboogy coming up, taking place on the beaches of Mozambique. Why are you excited to play? What can the dance floor expect from your set? Any plans to play in South Africa?

Djane Gaby: Oh yeah! Why am I excited? [laughs] I love exotic and unusual places to spread the music. For sure, I’m looking forward to another magical experience. You can expect the most heartful vibes and groovy uplifting tunes, which shall make an unforgettable flight for the crowed! I actually played a few years ago at a Crater party, in Johannesburg, which was organised by the same promoter, Roy. I hope to leave some great impressions so I’ll be in South Africa soon!

Psymedia: Is there any particular country or festival that you particularly look forward to or would like to play?

Djane Gaby: In my 24 years as an artist, I’ve traveled almost all over the world, played in stunning places likes Panama, Mexico, Australia, Asia, South Africa, all over Europe and the likes of Boom Festival, Rainbow Serpent, Earthcore, Ozora, Sonica, Glade, VuuV, Kupuri and more. However, there as still some places to be seen. For example, Japan and Brazil, which are still missing on my list, for now!

Djane Gaby: I love surprises, so, always working on something. Just keep your ears and eyes open for more to come! Follow my Facebook page for more information

Psymedia: Thanks for the interview, see you at the Boogy! Anything to add before we finish off?

Djane Gaby: I want to thank all my fans worldwide, for their loyal support over the years, and the number is growing. That’s the most beautiful feedback you can give me, for the work I do. To show me that you love it! Dance, have fun, love and shall music be your real drug! Thank you for the fun interview, see you all at Mozamboogy 2016. I can’t wait!