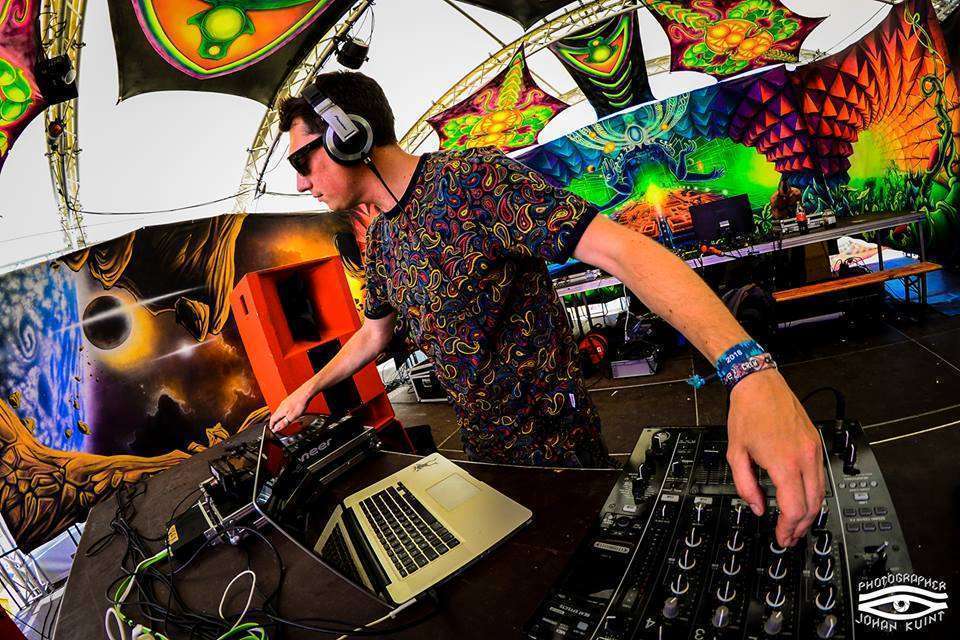 UK artist Dan Thomas (Sinerider, Divination, Antispin) is quickly becoming one of the leading artists in the Psychedelic music scene as we know it today. Since the release of his debut album Pure Tones, Sinerider has been touring the globe blasting huge dance floors with his unique, cutting edge sound.

Psymedia : The last time we spoke [in 2013] you mentioned the UK scene was growing. Are things still on the rise?

Dan: The UK scene is still expanding with new festivals, promoters and parties emerging all the time. While the London club scene and culture is in massive decline with nearly 50% of London’s venues closed in the last 10 years, people are still finding their way to party mainly during the summer months.  Boomtown Fair for instance sees a massive collaboration of UK crews including Tribe of Frog, return to the source and Illuminaughty, and pushing all genres of psychedelic music from The Orb to GMS to Parasense to Gaudi to Hilight Tribe and even a Hi-tech Stage.

Dan : Good question, I like to think of the three projects as quite different from each other, and reflect my favourite aspects of three of the types of sub genres of psychedelic trance that we can find on dance floors today.

Sinerider has always been a tribute and evolution of the music i enjoyed most back in the London / UK scene growing up. I see it as uplifting trance music but with a powerful backing track centred around the 140-145bpm range. It’s gone a little heavier and more full power to make room for my newer project, Divination.

Antispin as you may know is a collaboration project between myself and Hugo Rendell (Octognoma). It Is a blasting but minimal nighttime project which takes the influence of artists such as Scorb and Absolum, but also draws also on genres such as drum and bass and bass music from the UK. I often felt there were far too many sounds in other nighttime music for my taste and felt that great power could be drawn from a slicker, more minimalistic style approach.  This project centres around the 145-148 bpm range.

Divination is my latest project.  Music wise it is the culmination of all the music i have loved, utilizing all the production skills I have picked up over the last 13 years researching trance production. I guess some people call this sort of music Full-prog or Psygressive and lives around 136-139 bpm.

It is not dissimilar to artists Such as Zen Mechanics, Ace Ventura, Symbolic and Vertical Mode who are all my personal favourites in this sub genre but as you will hear it  has my touch and ideas on a variation of this popular growing sound.

Psymedia : Do you find it challenging to write for 3 projects or does it make it easier setting up those genre ‘boundaries’?

Dan : When writing the different sounds i am quite set about what I want when creating the music for each.  I see it as switching brains or personalities and ignore the others when concentrating on one. I will often only write as one project for a couple of weeks at a time and only listen to music that inspires me for that project during that time.

Psymedia : You’ve worked closely with 24/7 Records since early on in your career. Why do you feel like they are the perfect label to represent your music?

Dan : 24/7 is a great label, run by great friends. I remember the first time i met DJ Astralex in a party in London back in 2001 and started to work with him with my old project collaboration project “Compressor”. I made good friends with Andreas (Materia) when visiting Austria to make a collaboration track and when Sinerider was born it was the natural step to stay involved. These people are some of my best friends and we have always strived for quality in the music first of all. talk Ultimately no one person on the label has a full time position as manger and promoter, but rather we are a team and you are involved in the process rather than just sending in the tunes. I don’t know how other labels are doing it having said that but thats how we do.

Psymedia : Do you think it’s still important for an artist to release full lengths, or are EPs with fresh tracks the way to go now?

Dan : I definitely believe in full length Albums as a mark of an artists quality at the time. It really shows where they are at musically at specific moment and makes it easier for people to know what to expect when they book you or come to see your show. In the current scene  though there are many releases coming out all the time so it could feel a little be discouraging if you spend some years on an LP and it gets lost among the rest of that weeks releases. I personally like albums and i would encourage all artists to do it at some point regardless.

Psymedia : It’s been almost 10 years since the first Antispin track. Do you think your previous work represents your ability today?

Dan : Antispin was a project born of friendship and mutual respect for a certain type of night time music. The music that happened as a result turned out great as it had vision from the outset and our production skill level at the time was ample to achieve what we wanted (with a little extra effort). I know my production has continued to improve all the way and every week now the sound quality goes up. The content however comes from the heart, and that in many ways I believe is even more important than the production.  So the main thing at this point is to keep having vision and ideas for better tracks to sit on the newer production.

Dan : I always love to visit South Africa, the psytrance scene for me is one of the if not the most rocking and consistent on the planet right now, as it has been since I began visiting several years ago. I have always been impressed and amazed by the parties. All the producers I speak to have good things to say about South African parties, further cementing my belief in the rocking scene you have there.

Psymedia : Thanks for the interview, anything to add?

Dan: Thank you for having me!