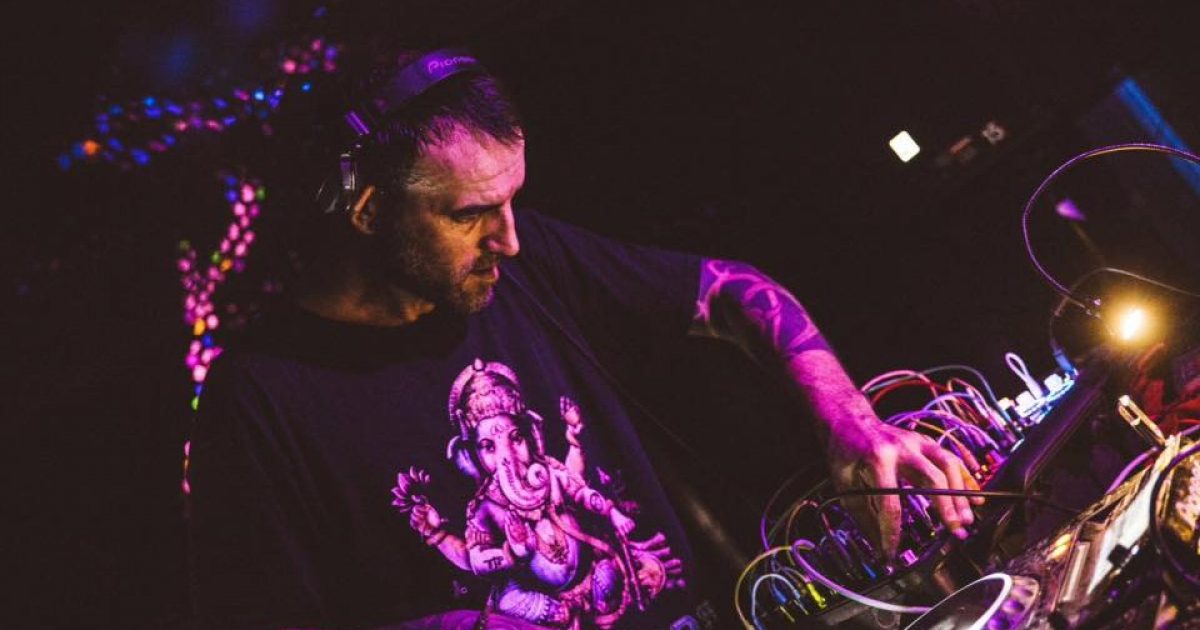 Seasoned producer and studio tech-head, Nectarios Meidanis, will be bringing his psychedelic knowledge to Earthdance Cape Town 2016 this weekend.

Seasoned producer and studio tech-head, Nectarios Meidanis, will be bringing his psychedelic knowledge to Earthdance Cape Town 2016 this weekend. Born in Greece, Nectarios performs solo as Martian Arts and has several collaborative projects. We had a chat with Nectarios about living in the UK, Boom, his analogue gear & visiting South Africa for the first time.

Psymedia: Hello Nectarios. Tell me about growing up in Greece, what was that like? When did you realize you wanted to take music more seriously?

Martian Arts: I went to my first party in 1994. It was near where I lived at the time in the outskirts of Athens, the forest of Varibopi. It was all Goa back then and I was amazed at the fact that people just took a sound system in the forest and played electronic music. Things happened in that forest, I was hooked straight away and here I am 22 years later, still loving a good party.

Psymedia: You grew up playing instruments and studied music in the UK. How did this benefit for your career as a whole? Did the UK scene have an influence on you?

Martian Arts: Studying at university was the best decision I ever made. I felt very lucky to be able to study exactly what I wanted. Synthesisers were like magnets, especially the Doepfer basic modular system they had in Uni. I was going by the university studios trying to jump into one of the synth studios when they were vacant, as the weekly hours I was allowed to book were not nearly enough to quench my thirst for the bleep.

The UK scene had a big influence on me. I was releasing breakbeat and some 4/4 music on Streetwise, Distinctive, Fabric Live, TCR and Audio Therapy to name a few). Back then you would actually make money from releasing a single with a track on each side of a record. DJs where still buying 12” back then. I’ve always loved funky music, so breaks were a great platform to express myself. I like to have the funk element in my psytrance tunes as well.

Psymedia: As Disco Hooligans, your first project, you released 2 albums on the netlabel Ektopplazm for free. What are your thoughts on free releases vs paid releases these-days? Are labels still important?

Martian Arts: Opinions vary on the subject, but labels are important to me and I think they should always be around. I came to discover artists just by following a label’s output that I liked the sound of. Back then, following a label’s output meant going down the record shop to listen to the new records. So I am keen on the old school way of things even if it now means simply following a Soundcloud page. Labels are extremely relevant to a music scene, especially when the people who run them are also people that just love the music and love the parties.

As for paid releases vs free releases, I think that most people just download music for free anyway, regardless of the release itself being free or not. Ektoplasm is good and I am happy to have released lots of music there. Many people start off from there and you never know who is going to download your album and send you a request for a booking. It happened to me, so it can happen to anyone.

Psymedia: How would you describe the sound of Martian Arts? Raja Ram is clearly a fan of your music. Would you say your sound appeals to the old-school, Goa lovers?

Martian Arts: Yes and no. Yes from people who hear a Goa vibe, mostly because I love a good old school Goa lead. No from the people that are not into the 16th single saw bass.

Psymedia: Are you still connected with the scene in Greece? What good festivals & parties are happening?

Martian Arts: I am connected with the artists here in Greece, but I don’t go to parties or play here. We had an amazing scene in Greece in the ‘90s, but greed sent it all down the drain and I am keeping my distance from greedy people.

Psymedia: How was Boom Festival this year? How was your talk at the Luminal Village? What makes this festival special?

Martian Arts: Boom is a pilgrimage, it’s that big festival in the relentless heat and dust with many people just going for it and at the end, catharsis comes and it feels great. The Luminal Village talk was very nice. I think knowledge is worth nothing, unless it is shared. I also like a good geeky synthesis talk.

Psymedia: It looks like you perform with quite a bit of analogue gear. Can you tell me more about your setup?

Martian Arts: I am using Ableton Live to play out and in the last couple of months I got this app called CV Toolkit from this young computer genius, that runs a company called, Spektro Audio. Its not an AU or VST, it’s just a standalone app that taps in the tempo of your DAW of choice. CV Toolkit sends a clock to my modular and it syncs to Live’s tempo and that is when the fun begins. I have finally made my live set to be the same way I make music in the studio, I listen to a beat and I patch a modular up to make a sequence and that’s me happy. I also have Machine with more drum samples and old blues chopped up vocal samples talking about African voodoo rituals and stuff, you know, the sort of thing that actually happens in a good party! Oh and monkey samples, elephants are nice but I reckon they’ve been done to death. It’s all about monkey samples nowadays. Preferably samples that you recorded on your own from the monkeys that live in Assagao.

Psymedia: Do you think a lot of top live psytrance artists are starting to neglect the ‘live’ part of their set(s)?

Martian Arts: I stopped judging what and how much someone does. Whatever makes the people on the dancefloor happy and also makes the performer happy to be there doing the thing, is fine by me. However, I loved the live sets of the 90’s where artists would show up with an Atari ST that runs Cubase with only 16 midi tracks, as I love watching Merv perform today. I like that raw aspect, but that is hard to go back to nowadays, where people want a mastered mix, playing flawlessly and loud as fuck from the PA, regardless of what is happening on stage. Nowadays the music is also not nearly as minimal as it was back then.

Psymedia: You’ve got a few active side-projects; the collective known as The Rave Commission, Ohmidrive vs Audioform & Strontium Dogs vs Merv from Eat Static. How do these projects differ? Is it challenging making time for all of them?

Martian Arts: Well, regarding Ohmnidrive, we haven’t done anything for the last few years, just a case of Pan and myself being too busy doing other stuff. Something will happen again at some point, though.

The Rave Commission is a massive melting pot of ideas from lots of people and the focus is peak time bangers. There is more than 8 of us now and last year we just all started focusing on it and we had something like an album done in a month. All the guys are great producers and the TRC chat is filled with bad jokes and filthy photos.

Strontium Dogs was Merv’s idea and me not believing that Eat Static wants to make a new project with your’s truly. Its the project where we just let loose. We agreed we’re just going to make a project and record really loud noises from the modulars where absolutely anything goes, regarding BPM and style, provided it has a mutant and at some points, punk vibe. I love it and the response has been very nice as well. The album is almost ready, we just need to mix the tunes down really as so far the only mix downs we have are from Merv’s mixing desk, when we play out.

Psymedia: This will be your first time in South Africa. What have you heard about our scene and what can the dance floor expect from your set?

Martian Arts: I know the scene in South Africa goes way back and I wish I could be there NYE 2000, alas I am very happy I am coming now and you can expect some big Goa leads and quirky noises and lots of fresh music that has not been uploaded anywhere yet.

Martian Arts: The Strontium Dogs album, and I am happy to say that I just finished my debut Martian Arts album, so I am very happy for both these releases.

Psymedia : Thanks for the interview, see you at Earthdance Cape Town! Anything to add before we finish off?

Martian Arts: Live in the moment, enjoy life and I’ll see you at the dance floor!