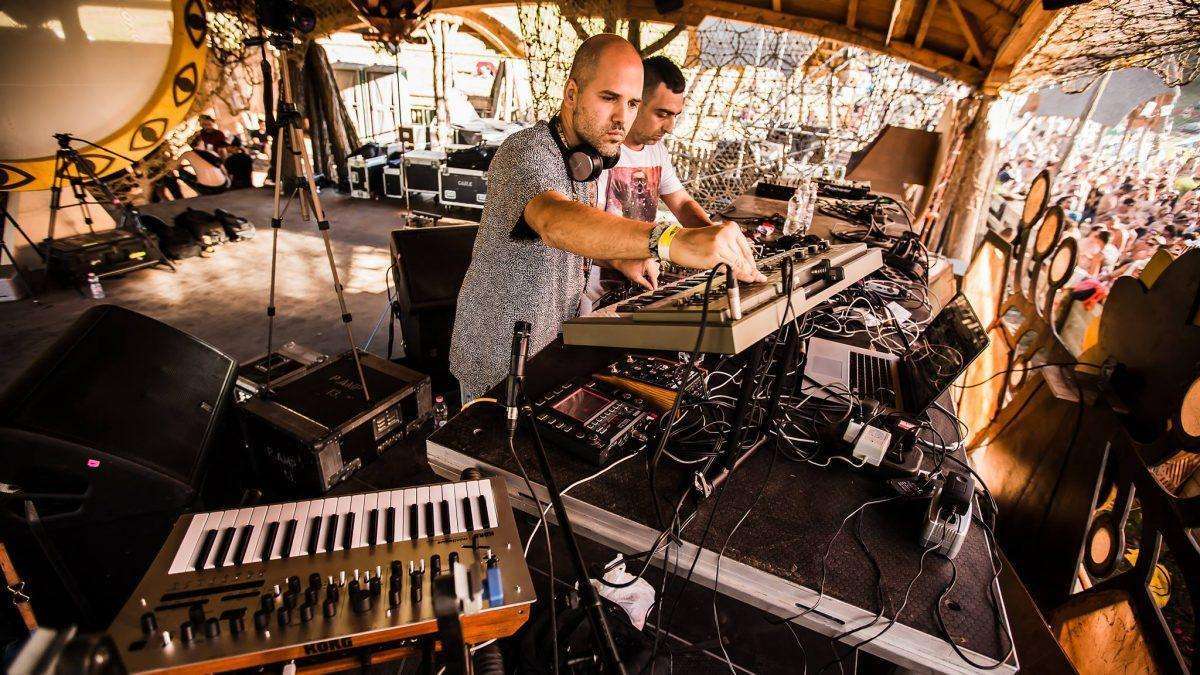 Loud is the LIVE duo act of Eitan Reiter and Kobi Toledano, currently signed to Nano Records. They have been producing high quality and original electonic music together since 2006, blending old school roots with a cutting-edge fresh new sound, and are now known around the world for their Psytrance production.

Psymedia : Shalom Eitan and Kobi! To kick things off, tell me a bit about yourselves, how you two met and started Loud?

Eitan : We met for the first time on 2004 through a mutual friend who thought we might fit musically. In 2005, I returned from a long trip in South America and came back fully energized to take psytrance seriousy! I built a small studio and called up Kobi to see if he wanted to make a tune together. Kobi came, and the name of the track was No More X… the rest is history!

Kobi : We met in 2004 through a mutual friend and in 2005; Eitan and I met again at a local bar for a catch up. Eitan invited me to his studio, and that’s when we decided to work on a track together… in a way, that was the kick-start for the project Loud.

Psymedia : What was the best advice you received early on in your career?

Eitan : Always stick to what you believe in and no matter what happens along the way, try to enjoy every step of it because that’s how you learn what the most important things in life are! Still to this day I miss our first studio that was in a small neighborhood called Subinya, a time when no one really knew who we were and we had to work really hard to get a stage for our music; even that was a super fun time!

Kobi : Do what you feel!

Psymedia : What’s the key to a long-term successful relationship like Loud?

Eitan : I think that the more obstacles and hard times we overcame together, the stronger we got. We needed to fall many times together to rise back up, and every time it got a bit better. When making music together, we really believe that we bring passion to the music world.

Kobi : I do not think that there is a formula to that answer. In our situation, it is all about respect for your partner; keep an open mind and listen to his/her advice and always communicate. In many ways, that’s what makes any real relationship.

Psymedia : How has the sound and production methods of Loud progressed throughout the years?

Eitan : Sound and production has grown incredibly. It just comes naturally, but we also do experiment a lot! We enjoy playing live and jamming with others alike to absorb what they do and mix it into our music. We play on a lot of analog gear, do plenty of recordings, work with as many interesting musicians and producers as we can, and always go back to the studio, even with the same tracks, to improve them and bring their musical idea to where we are today. Plenty of people, such as Udi Psysex, Ido Ophir Domestic , Yaniv Shulman , Yuli Perfect Stranger, Union Jack and many, many more have helped us evolve our sound along the way.

Kobi : There has been a huge transformation from a production method point-of-view; mainly focusing on how the production should be, and incorporating the right sounds to resemble what we are about. Having a proper studio to record in is also crucial.

Psymedia : Tell me about your new live show featuring drummer Yotam Weiss. How did that come about?

Eitan : We are working on 2 Live shoots at the moment with a representative from Ableton Live. We are aiming to have it as live as possible , making music on the spot! The difficulty here isn’t to record live, but to make it sound just as good as a well-produced track. It’s a very hard, yet fun process. We have already done plenty of ground work, pushing Ableton to the max and programming our own plugins, but there is still some work to be done.

Working with a drummer is really inspiring. Usually we focus on sounds, pads and melodies but drums are such a big and important part of electronic dance music and it always completes us! In fact, our first studio was one we shared with a famous drummer from Israel, named Denis who we also learned a lot from, so in general, drums are a big deal for us.

Kobi : The new Live show comes from the idea that we needed a change, to keep up with the times, and to add a LIVE element to our show with the help of a drummer (Yotam Weiss). Yotam is also a good friend of ours so the decision to have him onboard came naturally to us.

Psymedia : A few years ago you released Future Decks of London – Why Psytrance Has Become Shit. Were you surprised by the reception it received?

Kobi : This one was made by Eitan and Ido Ophir, will leave this one for Eitan.

Eitan : First of all it was not us, it was the Future Ducks of London – they just sent the video to us? Most people took it as a joke right away. Actually Union Jack heard it a day before it was up and they said it would be a massive hit. I was kind of surprised that it got almost half a million views a night, then it stopped.

When we released No More X we were trying to say that it is time for a change, actually that was the goal of Loud from the very beginning! Our first track on our first album,  Some Kind of Creativity was fully experimental. We really miss the creativity that artists used to bring into their music when they had more time on their hands, and not have to stay updated on Facebook and Skype to have a career. We even had to start playing music to satisfy the crowd, and not always what we grew up on but I guess change is a way of life, so you can either be upset about it or you can joke about it like the Decks did.

Psymedia : Your refreshed Ozora edit of Small Talk has been a huge hit. In your opinion, what was it about the changes that managed to recapture people’s attention?

Eitan : Small Talk was a big hit 5 years, and we decided if we added a little twist to it, it would make for a very popular release! We often like to change our tracks every few months. People were asking so much for us to release it again, so we released the last edit that was ready – the one we played in Ozora (therefore the name Ozora edit). Today we already have a newer version we play!

Kobi: I think what captured the people is that we muted many channels and left only the theme of the track (Vocals and main melody) keeping one mix, and more tuned towards the way music flows today.

Psymedia : You guys regularly release new mixes and videos online. Do you feel like you’ve fully adapted and embraced the internet as a marketing tool?

Eitan : We do what we can, we try to do a lot of artwork , a lot of video editing and shooting, graphics, blogs, remix contests and whatever we can think of at the time. We can do much more of course but we need to focus on whats important – MAKING MUSIC!

Psymedia : You’ve released an album once every two years since 2006. Do you see yourself putting together an album this year? Are they still viable [on the internet/with digital sales]?

Eitan : This last year we have been really busy with reproducing all our old music. We have a new studio that is really sounding great and we were super busy with working and developing our up-coming live show. Right now we got back to making more music… There will be an Album and a Remix album, but who knows when – all we know is that we can’t let time effect us; it needs to come out when it sounds perfect!

Kobi : Releasing an album this year, it is tough to say just yet. It’s still early in the year, but we hope to have some really cool plans for 2014!

Kobi : Production for some other artists.

Psymedia : What are your thoughts on the South African psytrance scene?

Eitan : Amazing! Beautiful and happy crowd, and such a great feeling of culture, and love for nature! You can feel Mother Earth there!

Kobi : Beautiful and happy people, a colorful nation, everyone really seems to get into the music – all in all, I love the scene in South Africa .

Psymedia : Thanks for the interview! Anything to add?

Eitan : See you soon, we are are super exited!

Kobi : Looking forward to blasting your brain in Cape Town!