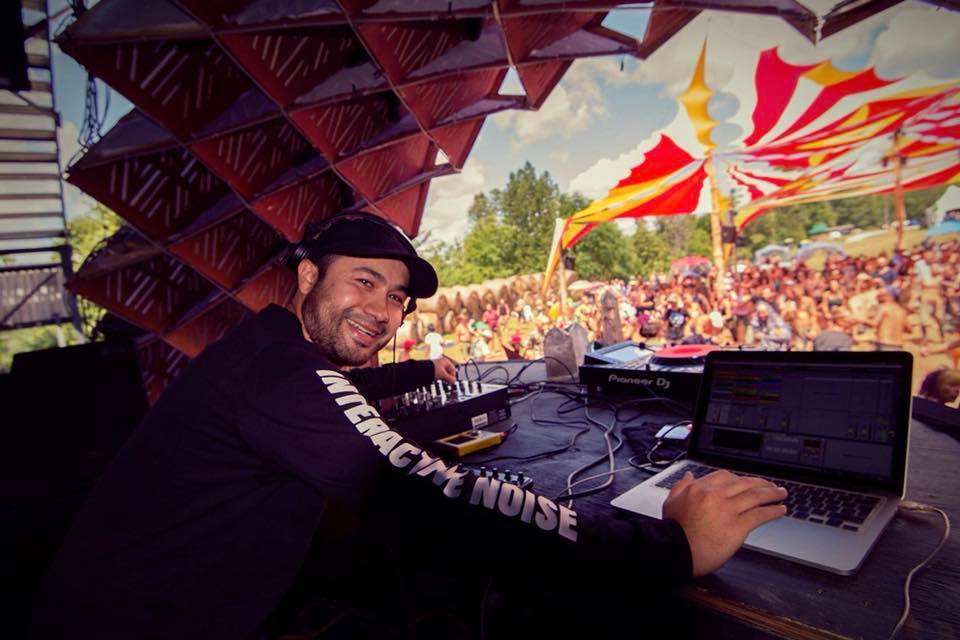 Since his first track at the end of 2008, and debut album Rewire following two years later on Spin Twist Records, Interative Noise has become prominent in the scene with his blend of Progressive and Techno.

Mexico’s Interative Noise visited South Africa during the first week of August to play at ESP nightclub in Johannesburg and Sirius in Cape Town. Since his first track at the end of 2008, and debut album Rewire following two years later on Spin Twist Records, Interative Noise has become prominent in the scene with his blend of Progressive and Techno.

Psymedia : Tell me about growing up in Mexico, and becoming involved with music?

Interactive Noise : I grew up in Leon Guanajuato, it’s a nice and quiet place in Mexico.  In 1998 I moved to where I live now, in Mexico City.  Before becoming interested in creating music, I was fully dedicated to skateboarding. I started to make music in 2004 with just a computer and speakers, not really professional.  I created my first tracks and uploaded some stuff onto social networks.  At that time, to me, it was a real surprise that I received many good comments and offers from some big labels.  I decided to work with Spin Twist Records [from Germany].  When that happened I remember I was so excited that I ran to purchase some professional equipment to create better music with a higher quality, and from then on I have not stopped making music.

Psymedia : How long did it take to find your own sound?

Interactive Noise : When I started to make music on my computer in 2004, my interest was through some friends who listened to trance music.  My first contact with this style of music was, to me, really impressive.  All these sounds with many feelings and emotions lead to me wanting to create my own songs. To get my own sound, I don’t think took a long time, and in fact, from the beginning, I started trying to mix different styles like Techno and Minimal with Trance music. I think that made the project stand out.

Psymedia : You’ve released three albums on Spin Twist Records. Tell me about working with the label.

Interactive Noise :  Yes, I have 3 albums released with Spin Twist Records and I am very happy to be part of this label.  From the beginning when I started working with the label, everything has been clear and honest.  I think, currently in the music business, that characteristic is a bit hard to find.

Psymedia : Your latest album entitled Memories features 10 remixes of recent dance floor smashers. Why did you decide to put together a remix album, and how did you go about selecting the tracks?

Interactive Noise : Time has past and Progressive Trance has advanced.  That gave me the idea to bring some old tracks that had a significant impact on many people, and with this, bring back some good memories and emotions from the old times. But now, with the new form of Progressive Trance, I hope I have achieved my objective.  The selection of tracks was not easy because there are a lot of good tracks.  Some off the first list had technical problems and it was not possible to obtain the files, but in the end this was consolidated.

Psymedia : How did the whole process of putting together Memories differ from your last album, Synthetik Pleasure?

Interactive Noise : It was a bit different for both. One of the objectives was to get a high quality sound, but with the Synthetik Pleasure album, I could expand my creativity more freely, while in Memories [consisting of remixes] I had to adjust everything to the original tracks and not go beyond the original concept of the song. Without a doubt I enjoyed both processes.

Psymedia : Do you think the album model still works today, when many artists seem to be transitioning to releasing EPs? I’d also like to know, you’ve had a steady amount of releases since 2009. Is there such a thing as releasing too many tracks, too quickly? How do you balance studio time and touring?

Interactive Noise : That is happening a lot now, with people preferring the digital release to CDs.  That  has led to it being increasingly hard to sell CDs.  In my opinion, I prefer CDs, and more so when I really like an artist.  There is nothing like having the CD with some pictures, design and interesting things within the album. I think that gives you more of a closeness to the artist.

With regards to my releases, in the beginning it was easier, but now with the tours, I have to get organised with my times.  It has been a bit difficult, but the system is getting formed.  I collect a lot of ideas during my tours and I write some previous sounds.  When I get back to studio I carry on.

Interactive Noise : I think the feeling of over saturation happened some months ago, with a lot of new projects trying to do an imitation of some sounds already done.  But now, some are getting their own sound, but without a doubt, the only way to stand out is by doing something new in our music.

Interactive Noise : Terahert is my alternative protect, focusing on Psychedelic and Goa.  This project is signed with Iono Music and I have some releases already. With this protect I do some deep melodies with powerful rolling bass and different equalization.  I have some unreleased tracks that are coming along and will be on the first album.

Psymedia : What did you think of Sirius?

Interactive Noise : The Sirius dance floor was a great impression, seeing everyone dancing and enjoying the party with good harmony. In fact, it was one of the best indoor parties that I have played. I can imagine the feeling at an outdoor party, for sure. I guess it is amazing. If I were to compare it with some other scenes I could say that is one of the most organized. I hope return soon!

Interactive Noise : Soon I will be releasing a track on a compilation called Audiophile Vol.4, as well as a digital EP with my friends Fabio & Moon. I am also working on another digital EP too.

Interactive Noise : Thanks to you, Psymedia!  I am really looking forward to coming to South Africa again.  I want say to all those people who attended Sirius and the South African Trance community, thank you very much for keeping the dance floor alive!