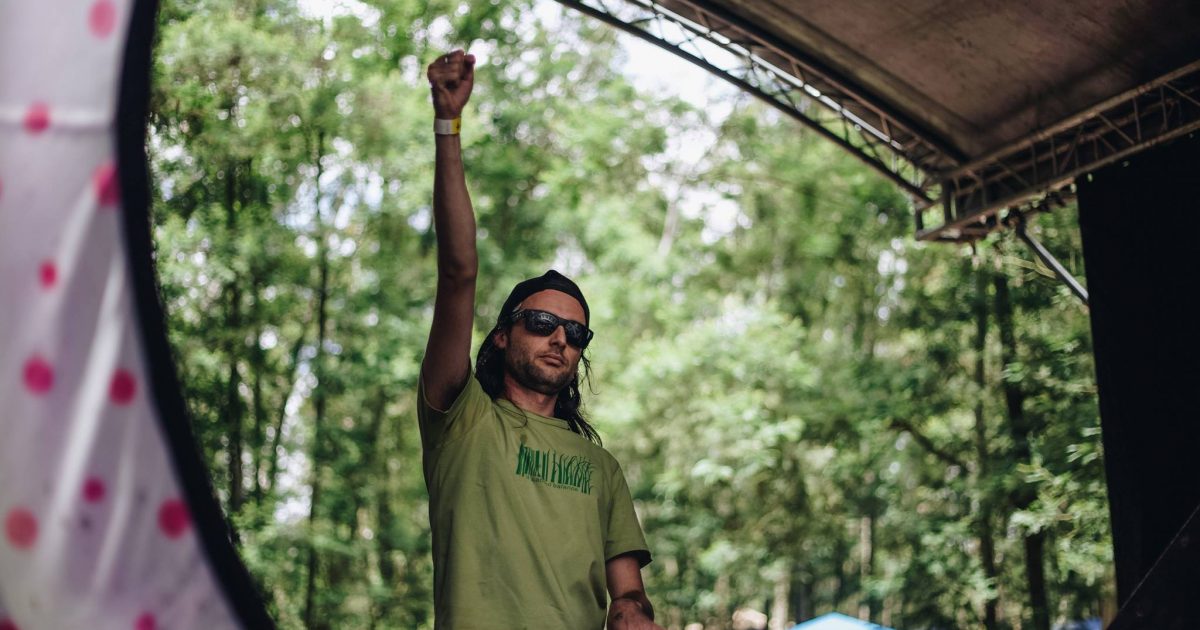 Zezia is Nicholas Zezia. The young Capetonian artist started attending psy events in 2004 and quickly fell in love with the music and culture. It only seems fitting to use such a unique surname as his alias, considering Nicholas solely plays his own original content

Zezia is Nicholas Zezia. The young Capetonian artist started attending psy events in 2004 and quickly fell in love with the music and culture. It only seems fitting to use such a unique surname as his alias, considering Nicholas solely plays his own original content.

Zezia : Hi Psymedia. I was introduced to psytrance by family friends who took me to a dedicated psytrance club called “Organafix” or “Getafix”, and then to my first outdoor which was Earthdance in 2004. After a month I decided that this is what I wanted to be involved in as a culture and a career. The name Zezia is actually my last name and my friends have been calling me that forever, so it seemed right.

Psymedia : How important was it to you to have a set that only compromised of your own original material?

Zezia : Having a full set of my original music was very important from day one. I first learned how to DJ, basic mixing, etc. I was too young to get hired at the time in any case so I decided to work hard on my own production so that I would be known as an artist from my first set. I still have a long way to go as I am constantly learning.

Psymedia : Did you have any formal training? Did it help in the end?

Zezia : I have done a small electronic music programing class at Cape Audio College. The understanding of synthesis, sequencing and programing came through time, and bits and pieces from fellow producers. I believe a full audio engineering course would have helped me more at the time.

Psymedia : Tell me a bit about your self-titled EP from earlier this year. Has it been well received?

Zezia : That EP consists of older tracks we put together and released with {psy.ology} Records. I can’t really say if it was received well as I am still very much an up and coming artist.  I have some new releases coming soon that I am confident about.

Psymedia : Your remix of Shift’s track Consequences made it onto the remix EP. You must be pretty happy about that…

Zezia : Yes I am stoked about the release. Basically I tried to use the same sounds and energy as Shift and slowly turn the track from his twilight style to my daylight/morning style, like a transition track from one feeling to another. The remix part of it becomes more apparent as the track progresses with an electro/trance bass line added to give a daytime festival vibe.

Psymedia : Do you wish more artists would provide similar opportunities?

Zezia : Yes I do, especially if there is a chance of releasing an entire album of remixes. Releasing digital music is great exposure for artists.

Psymedia : I believe you were starting a project with Ninja Jack, who helped you with your Zezia sets. Did anything come of that?

Zezia: My project with Ninja Jack (Joshua Tallie), is called Monoclinic. It is way more hectic and a harder style of psytrance, almost twilight, but not too fast. I am very exited about the act and can’t wait to perform it live. Think of it like deep forest psy that is clean with a dense lower sound to it. Our first single release will be on Phantasm Records as well. They really like Monoclinic.

Psymedia : What equipment do you use during a live set?

Zezia : For a live set I use Ableton Live software with an M-Audio controller and an Edirol UA-25 sound card. I also add effects, leads, pads, and more with an analog Access Indigo synthesizer along with a Mini-Kaoss Touchpad. When I DJ I mix CD’s with the CDJ’s on stage. A mixture of the two would just be mixing edited versions of my tracks on the decks and adding live sounds over the set with my access synthesizer.

Psymedia : You’ve made a couple of trips to Johannesburg over the recent years. What are your thoughts on the scene there at the moment?

Zezia : It is still quite intimate and the people are dedicated. I see the events getting better and bigger so things are looking good in Johannesburg. The parties there are very peaceful but powerful.

Zezia : Well firstly I would like to say, whether I am mixing on the decks, performing a live act, or a mixture of the two, I am always playing only my own production. So usually I drop all my latest tracks which are a blend of energetic bass-lines and drums with rhythmic sound effects and atmospheres. You can expect my typical, full-on trance made for the daytime.

Zezia : I have an EP coming out soon by Mainstage Records (Israel), and another much later with Phantasm Records (United Kingdom), and some singles on Phantasm Records showcase album, two of which are collaborations with local artists.

Psymedia : That’s awesome. Do you think your upcoming releases on Mainstage Records and world renowned Phantasm Records will help further your career internationally?

Zezia : Yes I definitely think these releases will open some doors for my project internationally, or I hope so. Mainstage Records was opened by Bizzare Contact and Vibe Tribe after years in the scene. They have made big names for themselves and have a huge following so I am very exited about that EP. The Mainstage Records EP will be a little more uplifting, Israeli style as apposed to the releases on Phantasm Records. But the tracks always have a consistent sound in general.

Zezia : Thanks for the opportunity. I would like to say keep up the good work representing South African psychedelic trance. Also, not everyone may like my style of psytrance but to those that do, I make music for the individual to have a euphoric, energizing dance meditation whilst soaking in the sun. Or at least to have similar positive  experiences that I have had the chance to enjoy during this journey.  It’s for you. I would like to thank Calvin (Switchcache) for taking me on board PsynOpticz, and all the promoters, DJs, artists and fans for giving me a chance. My parents and sister for their support and for putting up with my nonsense over the years.