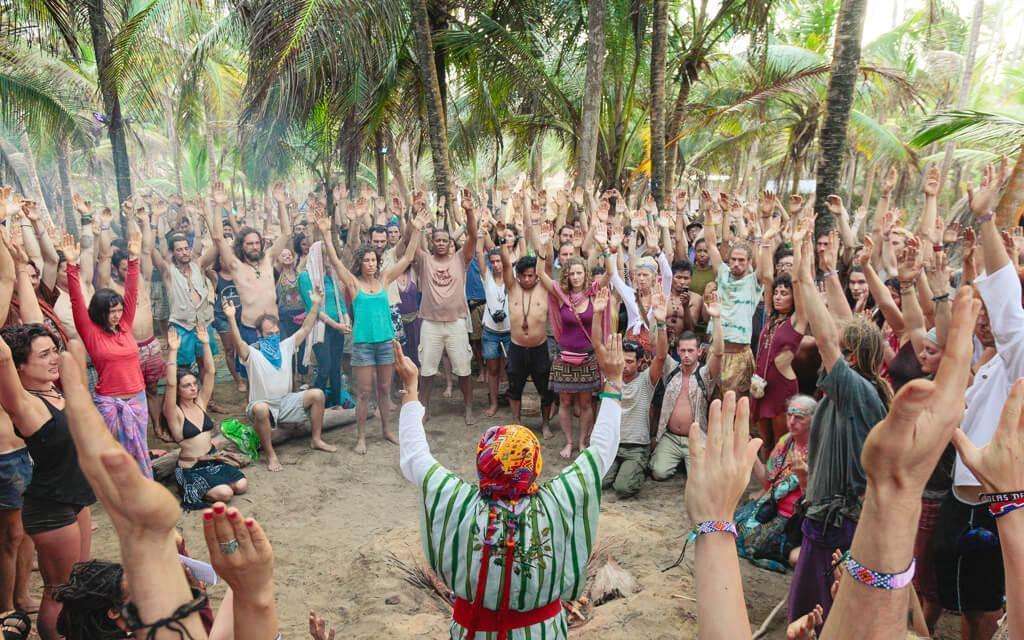 The cheapest flight from my home country of Australia to Panama ended up being a 50 hour marathon, which was made all the more brutal by the fact that I went to the airport in Brisbane straight after Earth Frequency Festival. By the time I arrived at my hostel in Panama City I was delirious but neither the oppressive humidity nor the rampaging construction crew outside the window doing their best Psychovsky rendition kept me awake.

I’d come to Panama for Tribal Gathering, a festival that takes place over three weeks on a beach in the Caribbean. The organizers bring in aboriginal tribespeople from all over the world to run workshops on various aspects of indigenous art and culture, as well as shamanic ceremonies using a variety of sacred psychedelic plants. Other non-indigenous run workshops feature during the first two weeks of the festival as well, after which there are five days of electronic music or a “modern dance ritual of the psychedelic tribe”, as the festival’s website puts it. 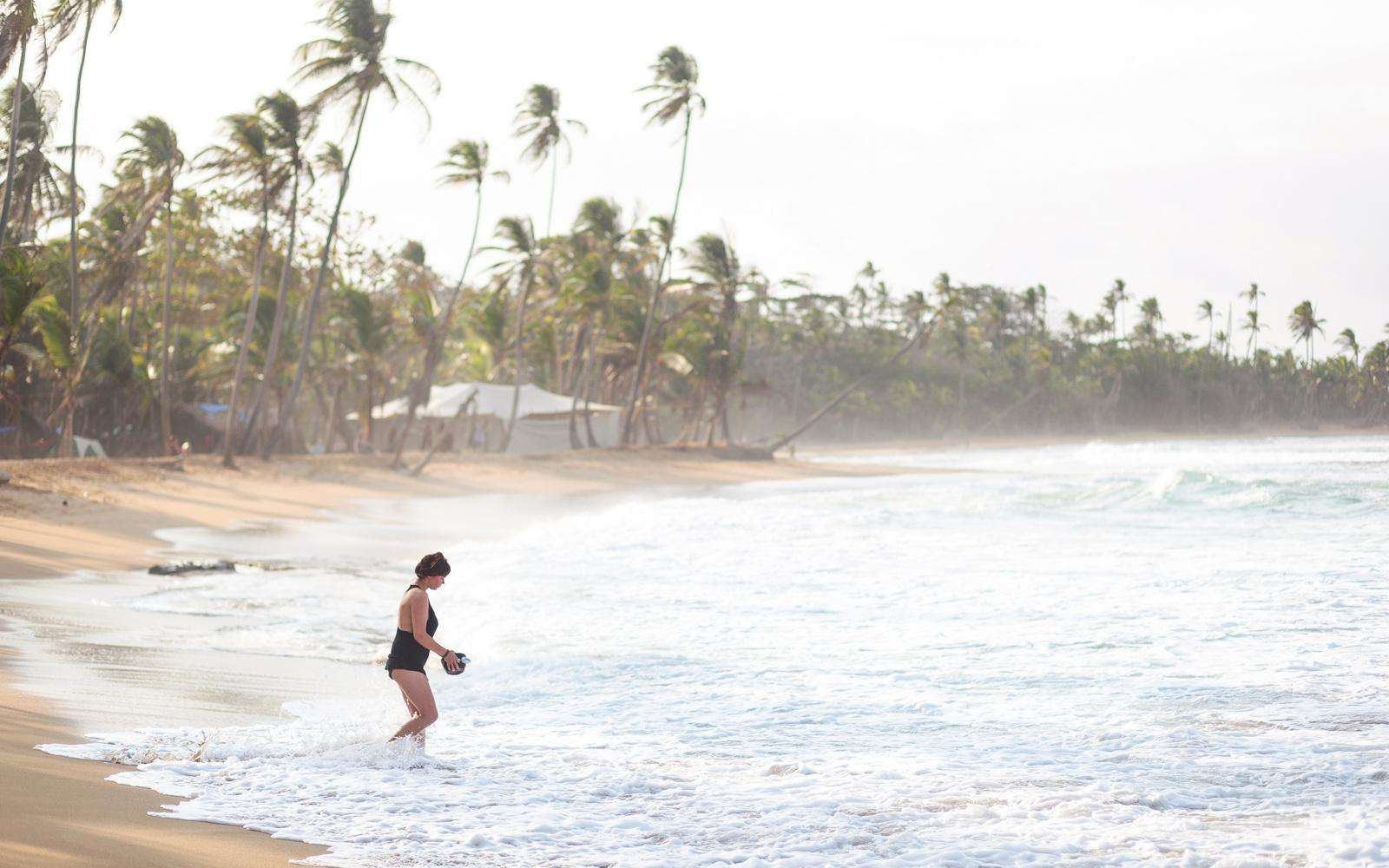 After a decent sleep my two friends and I grabbed some supplies from the supermarket and caught the bus towards the Caribbean side of the country. The piles of rubbish and the obtrusive Coca Cola billboards didn’t tarnish my appreciation of the picturesque landscapes we were driving through, however the American guy seated a few rows back bragging loudly about his extensive experience with Ayahuasca and how spiritually enlightened he was to the poor bastard who’d chosen a seat next to him did make me feel a little apprehensive about the forthcoming weeks.

The steadily increasing volume of the bus driver’s salsa music eventually drowned out this drivel however, and any negativity I was feeling evaporated when we finally arrived at the festival site – which was stunning – and reminded me a lot of a Windows ’98 desktop background. The two half naked surfer guys at the gate had definitely ripped one too many billies before the bus arrived and needed a considerable amount of help locating my name on the list and fastening my wrist band.

The first few days were of the festival were pretty quiet.  We spent some time exploring the nearby beaches and jungle and got used to being woken up by screaming monkeys outside our tents each morning. More people arrived each day and the atmosphere was peaceful. I was struck by the seemingly effortless harmony between the tribespeople and everyone else in the festival. The cohesion between such heterogeneous groups of individuals is something that always impresses me about psychedelic festivals, and Tribal Gathering was exemplary in this regard. 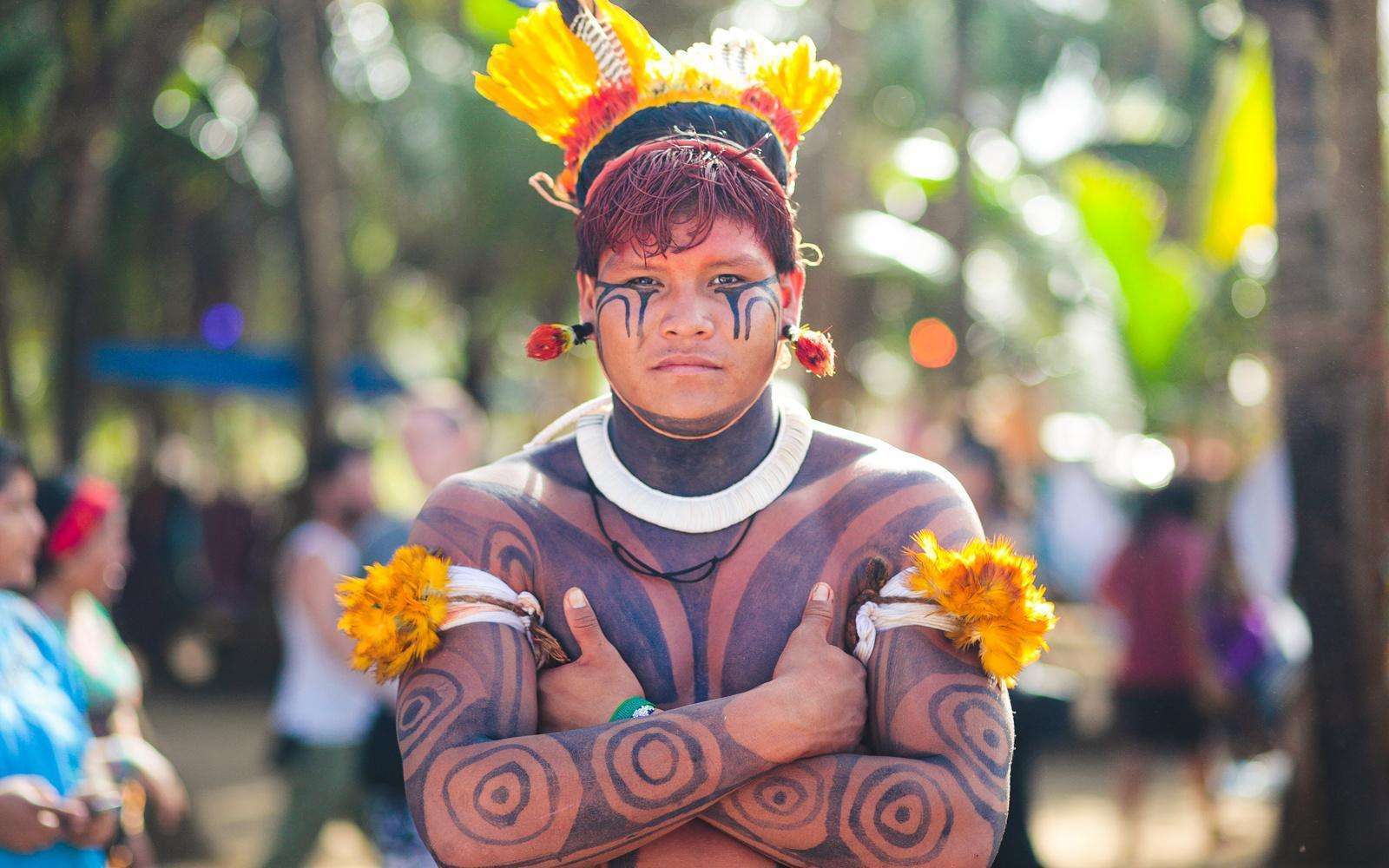 I was also impressed by the effort people put into building their camps; unlike other psychedelic festivals I’ve been to which usually last just than four or five days, here we had three whole weeks, which meant lot of people were bustling around industriously with machetes, dragging bits of driftwood and bunches of palm fronds back and forth and erecting impressive makeshift shade shelters.

We heard rumors about snakes, crocodiles, an impending monsoon and bricks of cocaine washing ashore from Colombian smuggler boats, however none of these things were yet to materialize. There was however, a persistent population of fearless and territorial crabs inhabiting our campsite.

Relaxing days passed by and I spent a lot of my time either doing workshops or lying in a hammock. I enjoyed browsing the tribal markets and learning about Kanayuna body painting, Kalingo carving and other such things, but one of my favorite sessions was an “ecstatic dance” workshop, which was just a group of people dancing to Goa Trance played through tiny speakers and an Israeli woman yelling, “breathe… feel the energy!” into a microphone at the front of the group. After a while she turned the music off and asked everyone to lay down with eyes closed, then walked around with a didgeridoo, blasting loud notes in people’s ears as she passed by. I’m not sure what the idea was but it was entertaining. 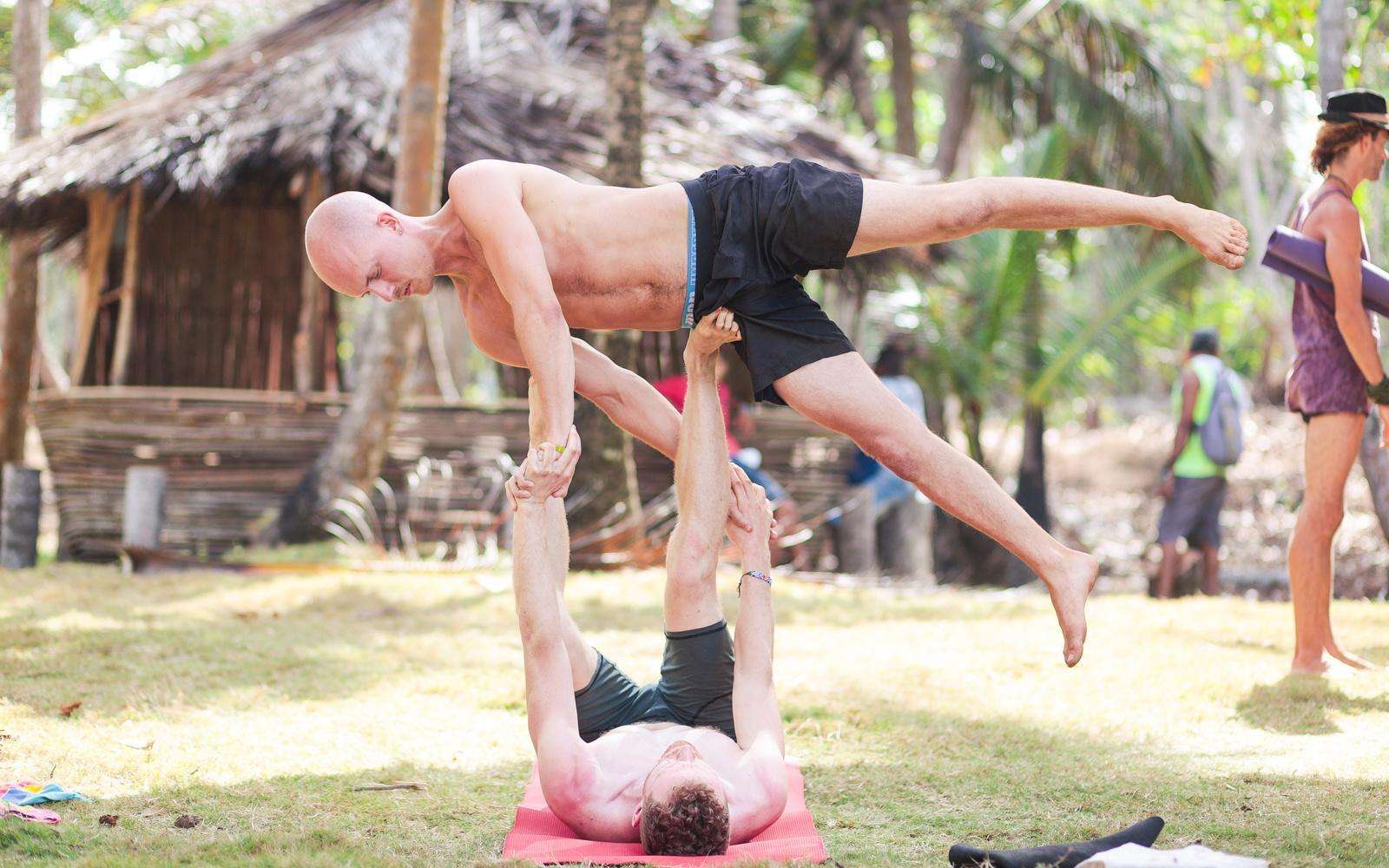 After several consecutive nights of waking up to the sounds of screams and howls coming from the ceremonial grounds which were not far from our campsite, I attended an information session being run by the Shipibo tribe from Peru. The shaman, Francisco, stood timidly before us with his hands clasped together resting against his stomach. Speaking softly he told us that Ayahuasca was a medicine and not a drug, and while ceremonies could often be difficult or confronting experiences the effect of “Mother Aya” was to cleanse and heal, that it would open our consciousness’s and help to foster a deeper appreciation and sense of connection to the earth. I signed up.

I fasted and rested a lot in the following days as per Francisco’s instructions. When the time came a few hours after sunset I grabbed my sleeping mat and water bottle, covered myself in mosquito repellant and followed Francsico and my fellow psychonauts quietly into the jungle.

‘Overwhelming’ is probably the most apt description of my first experience with Ayahuasca. Despite the fact that I woke up at sunrise with a pounding headache and dirt smeared across my face, stumbled back to my campsite, spewed in a bush and then passed out facedown in my tent, I would definitely describe my experience as positive. I’m quite certain that my experience barely scratched the surface of what this plant has to offer, but even that being the case the ceremony gave me a lot to think about and has certainly afforded me a deep respect for the connection that Central and Southern American tribes people share with Ayahuasca. 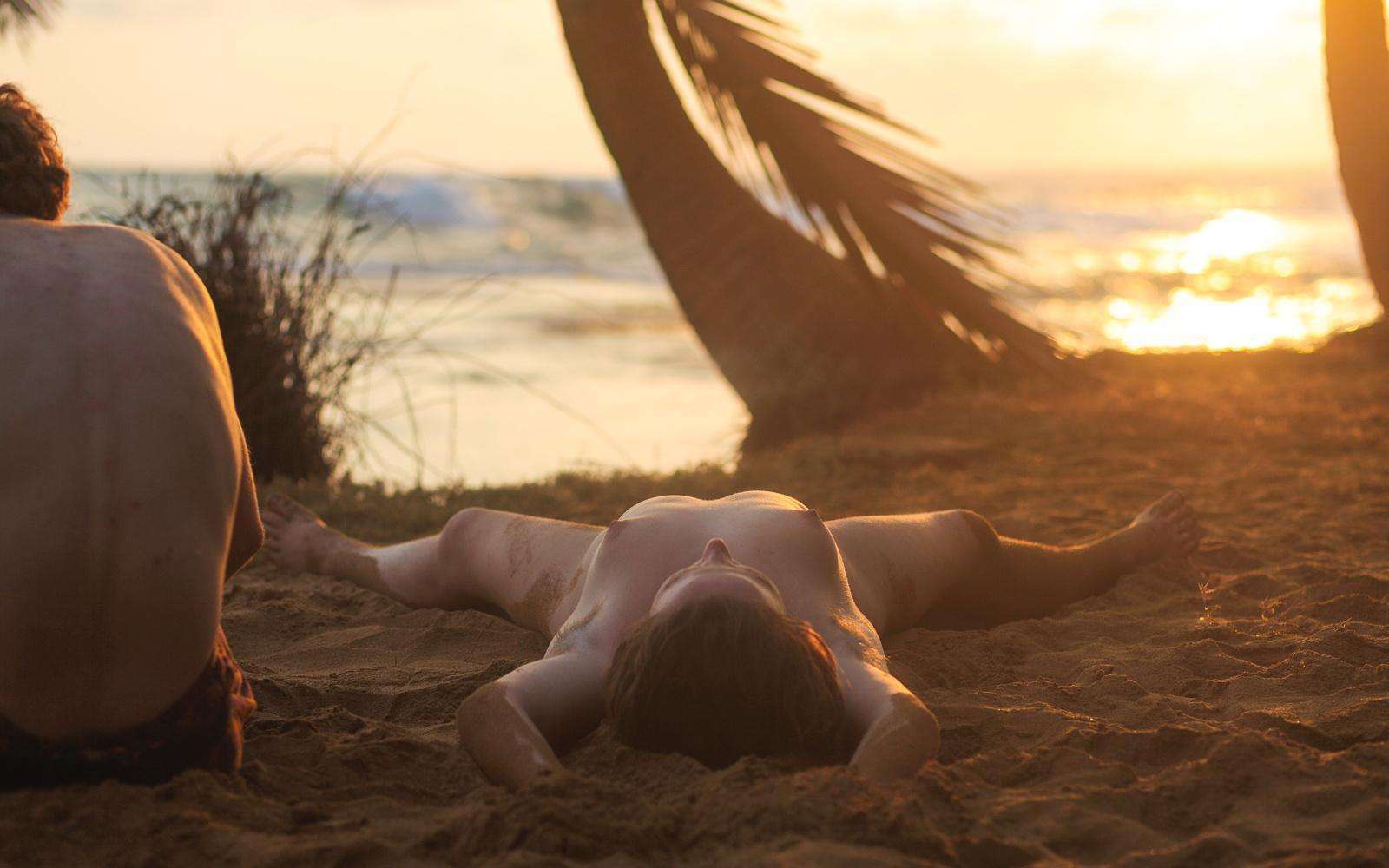 I was also pleasantly surprised by how natural and relaxed the tribespeople seemed – both during the ceremony and in general – and how authentic my interactions with them seemed. I never once felt like any tribal element of the gathering was contrived. It was also cool to see tribespeople taking part in workshops and activities being run by people outside their tribe. For me that gave the festival another dimension – it wasn’t just tribes teaching outsiders about their ways, but also tribes sharing with each other. I saw tribespeople trying yoga workshops, attending talks about indigenous art and I even saw one tribesman hanging out in our neighbor’s campsite, swapping stories and punching cones.

The day after the Main Stage opened would rank highly on a list of the most hilarious and bizarre days of my life. I followed a Danish guy I’d met the day before along the beach and down a narrow path through the jungle until we came to a clearing where about 150 people were gathered for what turned out to be an ‘LSD ceremony’. While I remain a bit dubious about how much you can or should describe the chaotic events of that day as ‘ceremonial’ (especially given the obvious comparison being made to the ancient, sacred ceremonies we’d been learning about over the previous two weeks) the guy in charge – a Texan dude in pink pajama pants with some crystals plaited into this beard – certainly took it quite seriously.

I’m still unsure why he asked us to “ferget where y’all came from, ferget yar names, y’all are nothin’…” (seems like a bit of a dark thing to say to people about to drop acid) and then “now I want y’all to stand up wan by wan and intraduce yourselves and say where yar from”, the irony was evidently lost on him. Although this speech and the other obviously strange things that went down during the ‘ceremony’ were obviously ad hoc and disconnected, the result was hilarious and novel. I’ve certainly never seen a group of that many people all tripping at once, and apparently neither had Hedflux, who seemed a bit taken aback as to why the dancefloor was so mental during his set some three or four hours later. 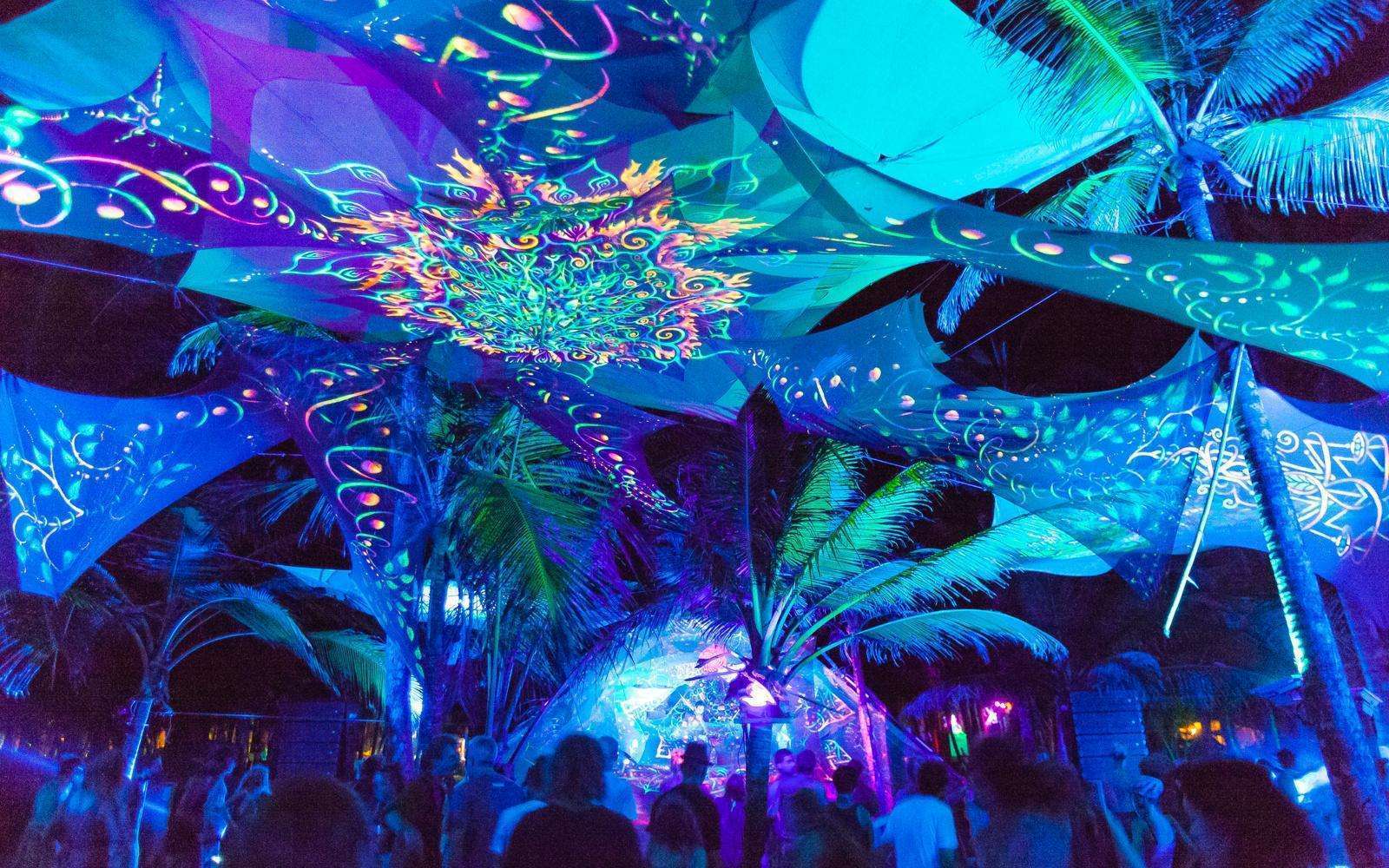 Jossie Telch, James Monro, Nanoplex, Liftshift and Perfect Stranger played some of the best sets of the festival for me over the following few days, and I found Mad Maxx’s sunrise set on Sunday morning to be pretty mind-blowing (so much so that I slept through Sebastian Mullaert and Gaudi’s sets, which I now regret). One person who seemed more gob smacked by the Spaniard’s thumping morning performance than me was a middle aged German guy who had done every ceremony on offer at least once during the first two weeks of the festival, and had barely left the dancefloor since the music began. I’d like to have spoken to him about his experiences but by this late stage in proceedings he was evidently seeing nothing but spinning fractals, so I let him be.

Yuli Fershtat closed the Main Stage on Monday with a belting five hour long techno set that ended mid-afternoon. I enjoyed listening to Bayawaka’s chill out set on the smaller Global Stage that evening from the luxurious comfort of a slowly leaking air mattress my friend had found, and when I was finally falling asleep I felt exhausted but happy after what were certainly three of the most memorable weeks of my life to date.

I remain to be convinced about the legitimacy of crystal healing or the existence of chakras, but I nonetheless feel that something pretty special happened at Tribal Gathering. I found it heartwarming to see the cohesion between ancient and contemporary psychedelic cultures, and it was wonderful to see recognition of indigenous culture that wasn’t tokenistic. It seems clear to me that the organisers harbour a deep respect and affinity for aboriginal tribespeople and their ways, and have visionary ideas about what we can learn from them and the persistent relevance of their culture.

I recommend Tribal Gathering to anyone who is interested or even curious about these subjects, and hope to see it continue and grow long into the future.

Bars, clubs and restaurants to close by 18:00

Free night stay with Airbnb credit after a festival