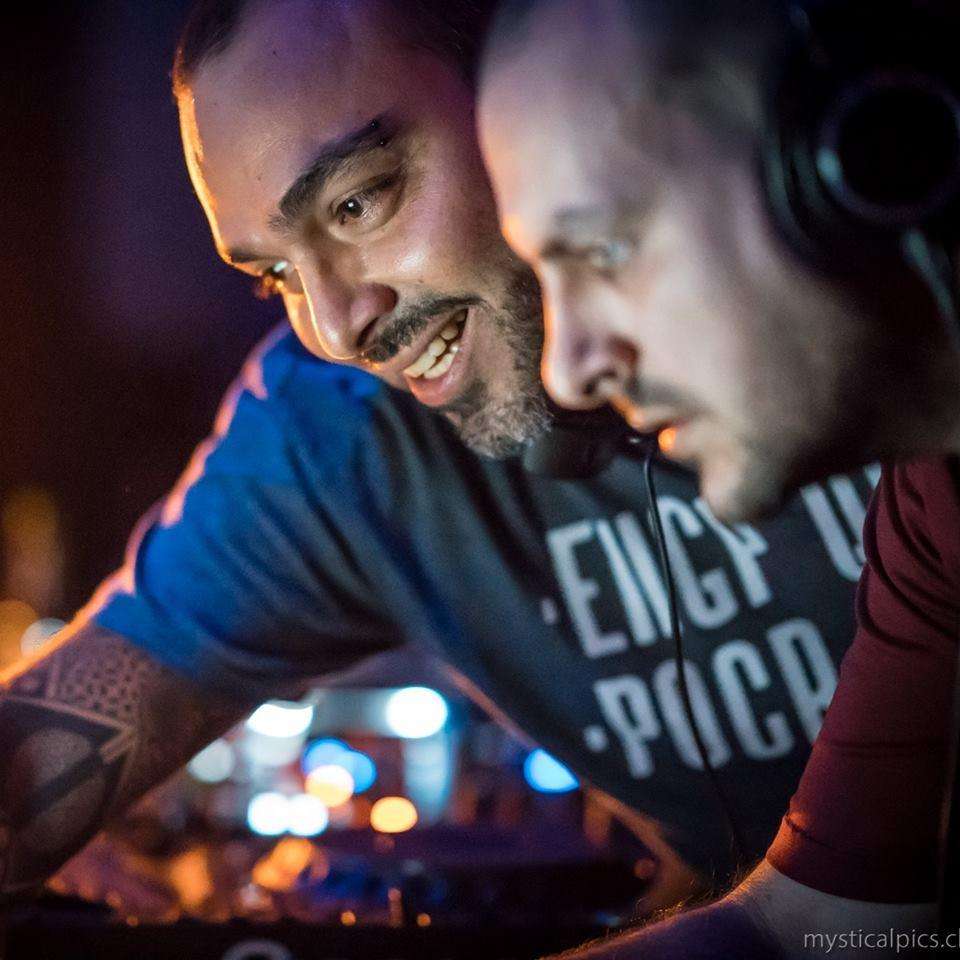 Meet Stereoxide, a project formed by Jesse Cabrera & Robert Blaga in the summer of 2016. The two also perform under the aliases Helber Gun and Johnny Reverb. Based in Switzerland, the duo have released psychedelic trance music on labels like Blacklite Records, Free-Spirit Records, Digital Om and more.

Hi Jesse and Robert! To start off, how long ago were you introduced to parties?

Jesse: I started attending psychedelic trance parties around 1995 – 1996. At the time in Mexico City, where I was born and raised.

Robert: At the turn of the millennium (2000) I was dragged to some strange party that took place in the woods. That’s where it all started for me. When I got there, the music had me in seconds, and I’m still infected by psychedelic trance.

A good duo obviously requires good synergy between the people involved. What makes the two of you work so well together?

Jesse: We became good friends, and I think it is important to be about to share our ideas through music. I believe we work so well because of our similar tastes in music. If we really come across something that we don’t like while producing, we simply take it out.

Robert: While it’s kind of important to complement each other, I think having agreements over disagreements helps achieving the final goal. We don’t hassle around too much on small things. We like the same stuff, the same energies and the same vibe. That’s why we have been able to produce more than fifteen tracks in one year.

You seem to be turning out tracks pretty quickly. How long does it take to finish one?

Jesse: Normally, we lock ourselves in the studio from Friday to Sunday, working non-stop for a week. During this time, we can write  roughly 70 to 80 percent of the track, let’s say. The rest of it gets polished during the next week of the studio session.

Robert: To continue from what Jesse said. We get the layout of the track with the basic elements pretty quickly. From there, we start to make a bunch of different sounds and arrange them accordingly. Somewhere in the middle of this process, the track starts to define itself, and we really just are helping it to evolve until we have a final track.

I believe you’ve also got a full length album on the way. Can you tell me about that?

Jesse: Well, yes, it is our plan next year to release an album. It will be about eight or nine tracks. We’re hoping to start and finish the whole album in 2018. The exact time frames are unknown. We still need to write it!

Robert: An album is in the pipeline and planned, yes. If the timeline fits, then it’s going to be released around the end of 2018, hopefully.

Have there been any particular inspirations that have inspired the sound of Stereoxide?

Jesse: We like a bit more complex music and not just simple sounds!

Robert: Yes! Seriously, there is something about it, that runs down my spine, when I hear layers of fm sounds that catapulting me into space. As I mentioned – layers! I find the tendency of today’s music to be kind of simple.

What other projects are you involved in?

Jesse: I have another psytrance project called Helber Gun, signed to 24/7 Records.

This will be your first time performing in South Africa. What have you heard about our scene and why are you excited to play at Jungala Festival?

Jesse: I have heard you South African guys are crazy. We actually just confirmed this, last weekend at a party in Zurich. We met five South African guys who are crazy as hell. Also, we’ve seen heaps of really nice videos from the psytrance parties that take place in South Africa, and for me it seems like it’s an amazing scene. I’m really looking forward to performing in South Africa at Jungala Festival.

Robert: I know a lot of South African guys from various producer forums online where I’m admin. The scene is also kind of comparable to Switzerland, it’s huge!

Can you believe we’re almost at the end of 2017? Any highlights?

Jesse: Well, we just started to play this year, in February, to be precise, and so far we’ve played at some festivals around Europe and Mexico. Next year we have some other countries lined up, which we can’t reveal at this present moment. We will also be performing at Experience Festival for New Years Eve in Koh Tao, Thailand.

Robert: I think were doing pretty well for this short time were together making music. There is a lot of exciting news coming for the future!

Jesse: Well, we have lots of tunes ready and waiting to be released. Some of them will be released on PsynOpticz, Grasshopper, GreenTree and Blacklite Records, to name a few.

Thanks for the interview, see you at Jungala! Anything to add before we finish off?

Jesse: See you at the dance floor!
Robert: Eks opgewonde!