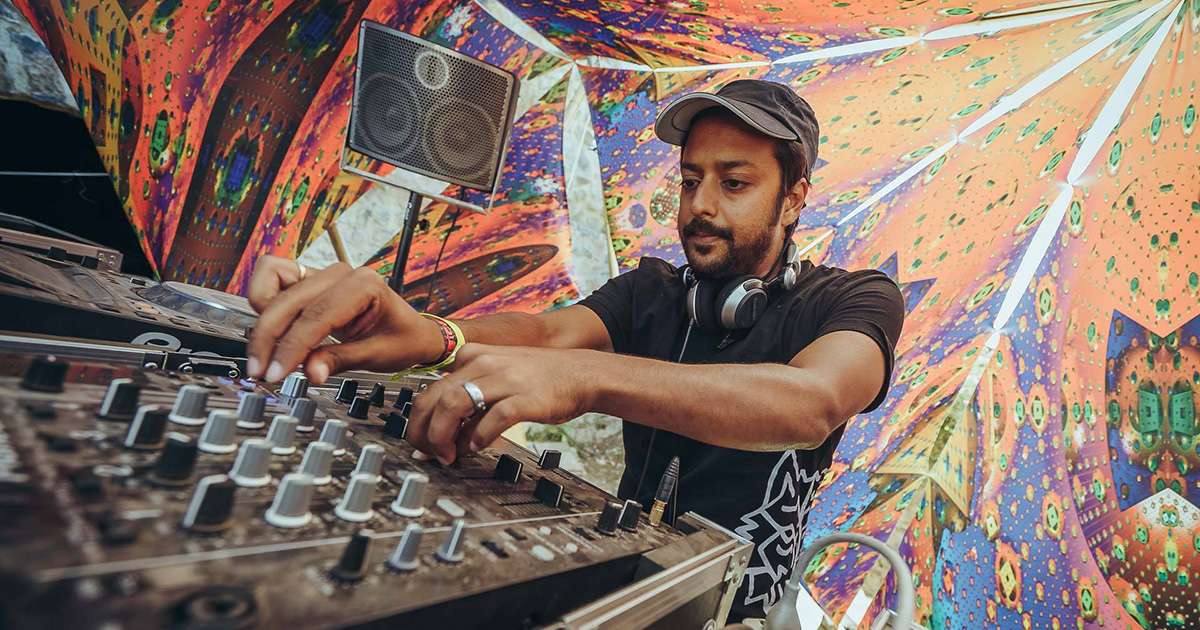 StarLab is the Psychedelic Trance project by Bharat Bindal from India. In 2011, Bharat moved to California in order to study music, and quickly became a popular DJ in the California scene.

After returning to India in 2013, he joined Digital Om Productions as a Live Act and has also released on other record labels like DM7, Shamanic Tales, Maharetta, Iboga, IONO, Expo Records and more.

Firstly, we know that there have been almost zero gigs over the last 18 months for all DJ/producers in any scene, what have you been doing to keep busy and inspired?

Hey guys! First of all a big thanks to you and to Psymedia for having me.

Yeah its been tough times all around for us in the entertainment sphere to say the least. Like many, it started off with me being completely in denial for a few months and then reality slowly setting in.

To be honest I didn’t think it was going to go on as long as it has so then it was really about taking it a day at a time eventually.

On the bright side it allowed for a lot of quality time with family and self which was well needed, however as things got more and more bleak, it became quite hard to remain inspired.

I realised I really needed a change of scene and decided to shift base to Goa last year November.

I think that really helped me and I have been making some of my best music lately.

We saw you were lucky to get a gig in the middle of all this, how was it reconnecting and testing music again?

Yes, luckily soon after I moved to Goa, the state had loosened restrictions and a few parties had started to happen so infact I was quite busy throughout Nov – March playing all around Goa and even in a few other cities here.

It was surely a refreshing feeling to be back behind the decks and play all the new untested music I was holding on to for so long but then since March we went into a lockdown again with India’s devastating 2nd wave. Still waiting for events to come back as we speak.

I guess the next question is, do you have lots of music to test or have you used this opportunity to step back from music?

There was definitely a time I had to take a step back because of all the mass hysteria and circumstances taking place.

The closure of live events obviously caused a pause in revenue coming from music and I needed to explore other means of earning an income. Because of this, studio time had definitely decreased a fair bit. Although, I did manage to make a good amount of music in this time, which I’m slowly releasing keeping the lack of global events in mind.

What’s coming next… perhaps some hints into the next 6 months for the StarLab project?

As there seems to be some hope around the corner seeing festivals starting up again in many parts of the world I definitely have some releases lined up. Following my very recent single release on DM7 records called Primitive Future, I now have a remix of a very legendary track by Symbolic & Outsiders coming soon on Digital Om as well as a collab with Avalon on Nano and another one with NoFace on a really massive VA that’s soon to be announced.

Finally, I’m very excited to share that my debut album is also well on the way in which you can expect a lot of solo tracks and a couple of massive collaborations as well.

We have followed the project since your first few releases – your sound has completely changed. You originally had a more psyprog approach, but have since moved the times and quite easily adapted to the more fierce style that seems to be more popular. Was this an easy transition, did you plan it or did inspiration take the lead?

It was definitely not anything I could plan or foresee and just started to gravitate towards a faster and more intelligent psychedelic style.

Also over the years I could sense from the festivals where I played that people were responding much better towards my more uptempo stuff so that definitely had a role in shaping my current sound. In general, I personally think that the vast improvements in Music Technology over the times has a role to play as well.

2020 was going to be one of your biggest years, some would call it a break out year. You were featured on the Alpha Portal VA, had successful releases leading up to the year (with support from top DJ’s and producers) and had bookings at 2 of the biggest festivals in the world (Ozora and Boom). Where to from here? How does one pick up from here?

Yes for sure I felt I was really on a good trajectory because of all the things you mentioned.

We lost 2 precious years (so far) but I will be playing at Boom and Ozora in their post pandemic editions and those are going to be even more iconic editions in my opinion.

Also, I feel I have really progressed both as a musician and as a person these past years so I will be able to express my vision even better going into the future and have something even more unique to share with the world.

If you could choose to collaborate with one psytrance artist, who would that be and why?

I would love to collaborate with some classic Goa Trance artists like Etnica and Astral Projection. I always strive to bring more Goa Trance elements with a powerful modern twist into my music so theres nothing like having a chance to make music with these legends.

You have relocated to Goa recently (from Delhi), what was the reasoning for this (other than the kick ass scene that once existed pre-Covid)?

First and foremost, it was a chance to get away from the big city after months of lockdown specially with the insane level of Covid cases in Delhi where I’m from.

Then, once some live events started to return here in Goa I obviously had to stay. I moved my studio equipment here and that pretty much sealed it! Also, there’s just so much more to do and see in Goa which you can never find back in the city (or anywhere in the world for that matter).

When you play, do you tend to DJ and play solely Live.. whichever the answer perhaps explain to us why?

That really depends. If I get booked specifically for a live set then I will play all my music but otherwise I always throw in some special tracks from my label Digital Om and friends when Im playing longer sets. You do get a bit tired just playing your own music weekend after weekend sometimes and its both fun and a learning experience dropping a few bombs from other artists here and there!

We all know the inner circles run deep in the psytrance scene, from shared presets to masterclasses between top flight producer friends – who would you say has taught you the most and assisted with your production and getting to that high quality sound you now have?

Coming from the Isratrance forum generation I pretty much learnt all my basics reading Psytrance production threads over there. So for a long time I have made music with completely my own samples & presets and never really had access to any “secret” sample banks & presets or be a part of any inner circle where I was schooled by any particular artists.

It was only until much later in my career that I had opportunities to sit down in the studio with established artists from around the world. That said, I have learnt a lot from each and every collaboration I have ever made so far and I must point out how much the Futurephonic Masterclasses have benefitted me.

You open up your DAW… How do you usually kickstart a project? Take us through the process?

Almost always with choosing a nice Kick and then making the Bass.

Mostly I have a key in mind because the key really describes what the final outcome (mood) is going to be.

Following that, I make a full percussion section which is then arranged out with Risers & Crashes.

Usually only after this I start making the sounds.

Atmospheres usually first to set the tone then one shots and FX to start a story followed by leads to give the emotion.

Not always in that order but lets say this is usually a good way to go!

Favourite Synth that you cannot live without?

If I have to choose one then Xfer Serum

No doubt some aspiring producers will be reading- if you could give them one quick tip to better their production, what would it be?

Make sure you have the best possible source of your raw sound. Be it from the synth or while choosing a sample. It should sound good even with nothing else on your channel strip.

Then after that, just minimal processing to polish it up. A wise man once said, you cant make diamonds from shit so I think the same applies here [laughs] That and to make your listening environment as good as possible. Invest in better studio monitors, soundcard and acoustics before going crazy buying hardware synths!

South African based psy-trance DJ & label Manager of Expo Records. Grant Pleming (Dynamic Range) is known for his articulate mixing and aggressive approach to full power, full on psychedelic trance sets. This reputation has won him sets all over South Africa and abroad.