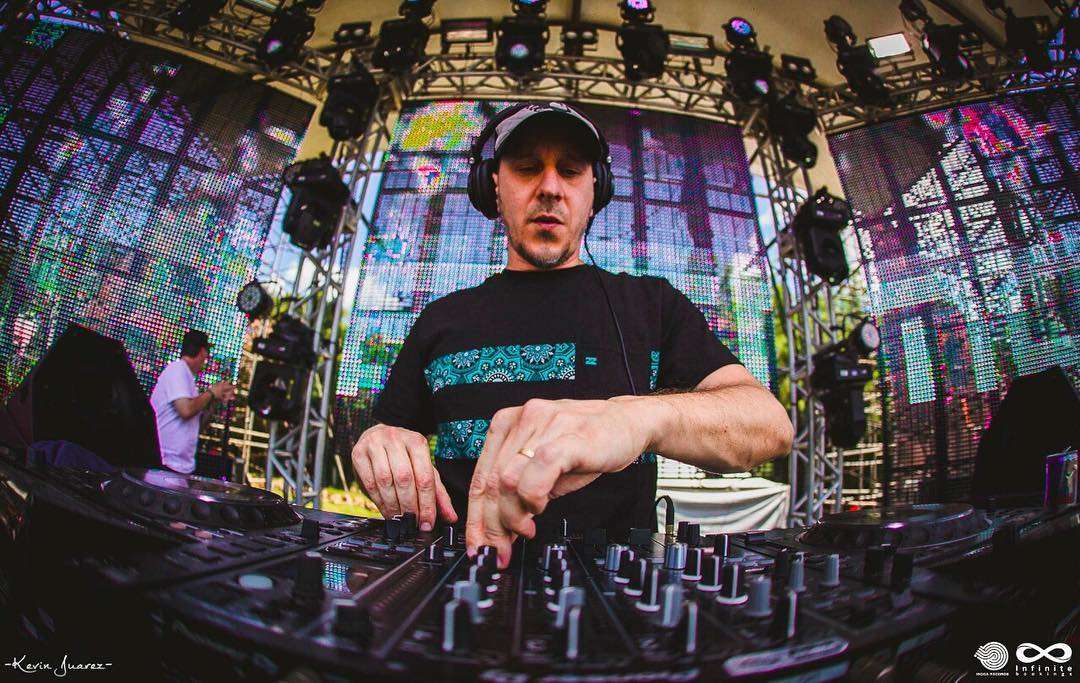 Ritmo is the solo project of Dubi Dagan. Once a metalhead, Dubi explored electronic genres, becoming fascinated with the sound of artists such as Depeche Mode, Jean Michel Jarre and The Prodigy. He then came across psytrance, and after long influential travels, Dubi returned to Israel and picked up two titles – office manager/PR of Bionic Records, and resident DJ at Luna Club in Haifa.

In 2006 Dubi moved to Tel-Aviv and became a sound engineer at DubiDub Studios. During this time the sound of Ritmo evolved, and in 2008 his first compilation Grand Slam and debut album Disharmonic Silence came out on Iono Music. Ever since then, Ritmo has been topping charts and playing to huge dance floors around the world.

Psymedia: Hey Dubi! Hope all is good your side. To get things started, tell me how you got into the psytrance world and what is the meaning behind the name Ritmo?

Ritmo: Hi Psymedia! I’m doing great, thanks! Well, I go way back to 1994, where I first started to go to psychedelic trance parties in Israel. It was a real magical time. Then, in 1998, I started to travel quite a lot to places such as Japan, USA and India where I spent some time going to parties as well. In 2001 I made my first steps as a resident DJ, at the Luna Club in the city of Haifa for approximately 3 years. I think it was all the experiences I absorbed along the years, in all those exotic locations combined with the expertise I developed as a DJ, that made me want to make my own music. Ritmo means rhythm in Spanish or Portuguese and it represents what I find to be one of the most important features in a track.

Psymedia: Israel is known for its strong diversity and has no shortage of psychedelic music. What was it about Japan, the U.S.A and India that influenced you so strongly early on in your career?

Ritmo: As a whole I would say I was extremely influenced by the Israeli scene, which was slightly more underground than these days, but kicking in all the right places. As for Japan and India these are non-Western regimes which I was fascinated about, it was a totally different experience than anything I have known before, culture and music wise. Naturally it had an effect on me, hard to pinpoint exactly what but I always love to meet new cultures!

Psymedia: You play festivals around the globe in faraway locations. Are these kind of trips something you just get used to over time?

Ritmo: What a wonderful question! Ok, so the past few years have been totally hectic and crazy, I do get to go to many places around the world, and being on a plane is not that easy when it is so frequent. However, I just love what I do, the satisfaction I get from the smiling people, and the energy I absorb from the wonderful people across the world functions as a charger that keeps me going. So it was quite easy to get used to this unusual life style when you feel such a fulfillment.

Psymedia: Returning to South Africa do you feel more comfortable having settled any doubts you might have had about the country during your first visit? I’m sure visiting any new country comes along with a little anxiety.

Ritmo: Naturally any new country makes me wonder how it would be, but as you’ve seen from my previous answers, I’m a natural born traveler – I love new places! I was excited to go to South Africa for the first time, but in a good way, and I must confess that what I have experienced exceeded my expectations. It is always good to discover an amazing scene in such an exotic and unique place and I’m looking forward to seeing everybody there!

Ritmo: I gotta say that this is such an amazing place that really made a mark and a huge impression on me, it was on my mind sometime after I left, people there are so nice and friendly. It is a pleasure! They actually remind me of your scene – real hardcore psytrancer’s who come full-on to parties to dance in Karahana (I hope you know this phrase in Hebrew… means really rocking it while dancing), and not to show off or pose. Love this attitude! Well after checking all the destinations I have been to this year I have to say that none of them were new, but each time you go to a place it’s a new adventure so I consider every gig to be a whole new expedition.

Psymedia: Is closing a party something you enjoy, granted most people stick around? Do you think progressive psytrance will ever have a place during the night time or stylistically is it more fit for the day?

Ritmo: Well, I believe every situation can be positive, if you make it as such. I think that each part of a party has its own unique enjoyments, and it is challenging to keep people going hard at the end of the party. Plus, I think it is an honorable spot, since people wait exclusively for the end to hear my music and it carries some kind of responsibility to make sure they leave with a huge smile! I can guarantee I will do my best to make sure it will happen! As for progressive during the night, I think it depends on the location and event, for example, in Israel people love to dance to progressive during night time, usually sounds from Zenon Records. So I think it is more a conceptual and cultural tendency and it varies from place to place. Personally I like playing progressive in the morning time after a hard night when people are in proper trance and their bodies can’t stop moving, it brings great vibes to the dancefloor.

Psymedia: In your opinion, what is it about progressive music that makes it so danceable? Do you think it has the potential to break into the mainstream?

Ritmo: Well there is no doubt that progressive is becoming much more popular these past few years. I think it has to do with the fact that it fits perfectly to the human body; it is not too fast, not too slow, and it contains many other genres, so many people can find something they like in it. For example there is dark progressive and off beat, so each genre is different. Another point is that it is not too aggressive or dull, I actually find myself playing it to people who never hear this kind of music and they love it! You could say it becomes a bit more mainstream, but I think there is still a long way before it will be declared as the new Lady Gaga!

Psymedia: I saw you’ve played at a few weddings. Do you get a lot of requests to play at more personal parties?

Ritmo: Wow man you really do make a thorough investigation! Yes I played at a wedding for one of my biggest fans, there is nothing more special than playing people’s most important day of their life. By the way, it was super awesome since he made Ritmo t-shirts for all the guests, and once I started to play he handed it to everybody. I get loads of invitation to play in private events and love it if it is to celebrate love such as weddings, but in general I prefer playing to an audience that comes to a party and not to people who might not appreciate this kind of music.

Psymedia: You’ve released countless remixes. Is that something you enjoy?

Ritmo: I love it! Mainly because after you have released a track and the audience has already managed to know it, it is interesting to release a few remixes to that track and see how other artists mold it, what kind of story can they add on it. I think it is challenging and interesting and perhaps most importantly it enables me to expand my patterns of music creation since I get to see what other options can be done with the same material.

Psymedia: What are your thoughts on the shift towards digital releases and making use of social media for fan interaction and pushing music? Are physical releases dying, and even more so for electronic music due to its structure with numerous compilations, remix albums/EPs, etc?

Ritmo: I find the whole digital transition a positive thing, it is healthy and challenging because your music reaches a much wider and diverse audience. Digital stores are open 24 hours 365 days a year which allows music fans, DJ’s or any person for that matter, to purchase what he or she wants in any given time – I think it’s awesome! The physical format is decreasing but it is understandable and predicted, however, there are many people who still love it so I don’t stop to release it. Perhaps I’m a bit old fashion, but I still believe there is something more special in giving somebody a CD than sending him a file.

Psymedia: Thank you so much for doing the interview. Do you have anything else you want to say before we end things off?

Ritmo: Thank you man, for this professional and interesting interview! Looking forward to Alien Safari, I’m positive it will be a happy and delirious event. See you all on the dance floor!