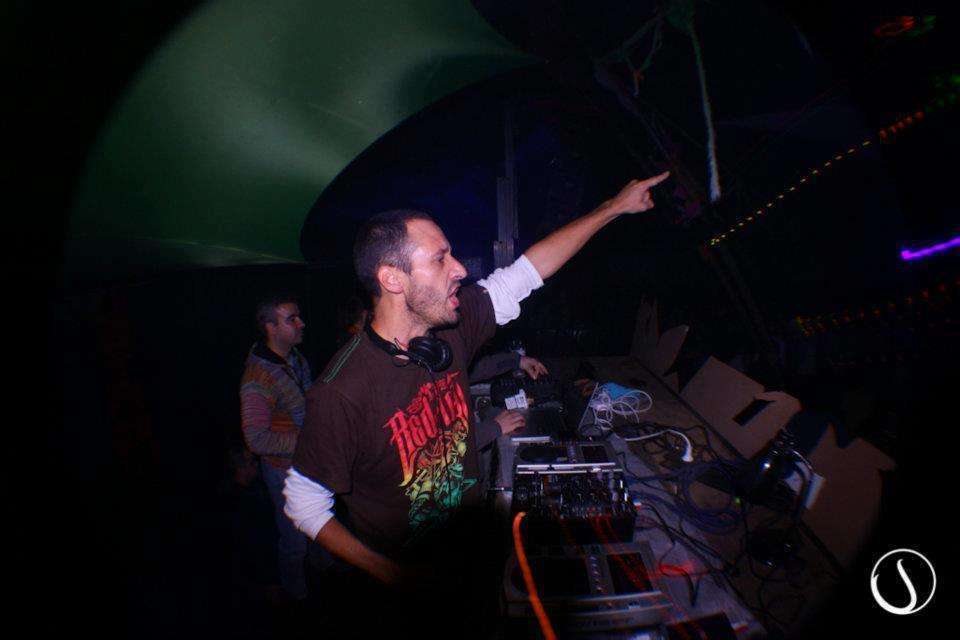 The Skragg and Rabdom L is Craig Hudson- one of the few remaining active artists who pioneered the South African Psytrance sound. Craig is also a member of the legendary trio Twisted System, and formed Timecode Records alongside Artifakt, Phyx, and Shift.

Howzit Craig! You’ve been performing as The Skragg and Rabdom L since the turn of the millennium. Tell me a bit about your music career (and the scene) during that time, and the formation of Timecode Records.

Howzit guys and gals. Let me first distinguish the difference between my various aliases. The Skragg is the name I use for DJing, Rabdom L is the name of my solo project, and Twisted System is Shift, Phyx and myself in collaboration.

I first started DJing in 1997 playing german techno, drumcode and the likes thereof. Artifakt, Phyx and I actually tried to start a techno movement in Cape Town before we started Timecode Records. I remember one of the parties we did was called Totemic Structures at the classic Afro-Galactic Café. After doing a couple of events there just wasn’t enough of a response, so we started focusing on the Psytrance movement. Somehow I got a demo to Dave Mac, who was part of the Alien Safari team back then and I landed my first DJ set (as The Skragg) at an outdoor trance festival back in 2000 – Silverstroom with Dhaya AKA Droidlock.

I don’t have any musical or audio training, I just had an ear for mixing and it logically progressed into wanting to make my own music. Sourcing music back then was next to impossible. Phyx had a record store in Observatory called Dogstar Records, stocking underground cuts from techno to tek-step to psytrance – anything non-commercial. Dogstar had an awesome trance catalogue giving us access to the latest and rarest Psytrance on vinyl. Dogstar became quite a popular little shop, besides stocking the best underground beats in Cape Town, they also had a bar and regularly hosted nights of all kinds of music.

It was during this time that I met Artifakt, who went to school with Phyx, and soon after met Shift at an Alien Safari. The four of us would create Timecode Records. It was a very exciting time as we had all just discovered music production software and were starting to make our own music. We were part of the first wave of producers that would create a legacy that would become known across the world as ‘the South African sound’. After a few releases we started throwing Timecode events to promote the label, bringing down some big international acts like Wizzy Noise, Abomination, Orion/Jean Borelli, Digital Talk and CPU to name a few. Good times!

What do each of you bring to Twisted System?

Twisted System made an immediate impact on the local and international trance scene. Back then there was nothing like it. Twisted System was way ahead of its time. We made heavily themed tracks with giant hooks and massive production (for the time). Lots of very catchy voice samples and spine chilling textures. There was never a formula with Twisted System, we just passed files around between the three of us until we had completed tracks. Occasionally we would sit together in the studio but that never works for long because one guy always ends up driving too much.

Twisted System went on hiatus in 2009. Were there obstacles in being a trio that caused the break?

As popular as Twisted System was, being a trio made it basically impossible to get booked abroad because of the costs involved with flying three of us out. We also all had our own respective solo projects and we began focusing more on our own music. Twisted System just wasn’t sustainable financially and we all pursued and poured our energy into our solo projects.

And what about a Rabdom L full length?

This is a good question! I’ve been trying to get a solo album out for a long time. On several occasions I set about to write 9 original tracks for an album but always ended up selling them off as singles to various labels before I could complete the album.

Obviously now digital EP’s are the popular thing and I have a monster EP series planned with 4 labels I represent which will be out in the following year.

So you think digital EP’s are the new direction. Is there added pressure to get tracks out as quickly as possible today?

Well, this is the thing. With the advent of digital and online music stores, artists have to practically give their music to labels and most will never see a financial return off of online sales. To give you an example, I have had dozens of releases through digital sales and have never received one cent in royalties. That said there are one or two labels that still pay me up front for tracks.

In the pre-digital era we were selling our tracks to labels for a very good price. Or, if you wanted to write an album, then you would get paid handsomely for that album. These days the artist relies on making his money from the performance. Thus, it’s better to put out EP’s these days on multiple labels to access a wider audience in the hope that the exposure will result in a gig somewhere.

So in a sense the label does the marketing, and signing to numerous labels expands your reach. But doesn’t it cause a delay? Why not release directly to your fans, maybe even for free?

Exactly – if you aren’t getting paid for your work then it makes no sense to restrict yourself to one channel, one audience. Rather broaden the footprint so that more ears can hear your music which by basic law of averages will result in x amount more gigs. That’s why I’m signed with 6 labels.

I really like the idea of going direct and in the process of building a Rabdom L website that will incorporate this feature, but the labels have an existing fan base and that is what you need to tap into. The more labels the bigger the total fanbase. I personally don’t mind the time it takes to get released because it gives me that time to play the track and send it to my friends to play pre-release.

What are your thoughts on Shift’s comments regiarding short sets and stale lineups at festivals?

I agree with everything Shift has said. This is not a new debate, it has been stirring in the ranks for quite some time now, and I’m amped to see it out in the public space because things need to change. Currently our system is unsustainable. You get artists who put ten years into this scene, help create what it is today, locally and abroad, yet can’t get a booking in a city that has an outdoor festival every weekend. We have already lost three legends from my generation – Artifakt, Phyx and Slug. These artists had no choice but to go back to work in the rat race and it will continue to happen to artists because we all have to pay the bills and eat with a roof over our head

Artists are getting bent over and shoved up the ass by promoters in Cape Town. The pay-to-crowd attendance ratio is drastically disproportionate in favour of the promoter. Promoters also seem to think that the more names they can cram onto a line-up the better the event is going to be – BULLSHLAGGA! Recently there have been times when a promoter will book me to play for half an hour back to back with someone else! What a fucking joke! There should be a limited amount of live-acts allowed to play at events and the rest should be DJs with a minimum of 2 hour sets. NO stop, starting after each set. DJs must mix into and out of each other so that the crowd doesn’t even know the DJ has changed.

Maybe you guys need to punt yourself a bit more? Put yourself out there?

Well, I luckily have been getting some bookings whereas Shift got completely ignored this season – I don’t think it was intentional on most organisers part, more a case of out of sight is out of mind. The gaze of the adoring fans is bright yet with a very short concentration span and zero memory.

Here one day, gone the next – the show must go on and all that crap. These days the competition is fierce with hundreds vying for the position of a few and as an artist you have to do more than just make good music or DJ well.

You go to be your own private PR Marketing Guru, spending way too much time on social media platforms pushing yourself (and so on). You gotta be your own agent when dealing with your bookings. And the list goes on.

Is it still easy to have unique sets?

The only way to stay ahead of the pack as a DJ is to get music directly from the artists. Being Rabdom L affords me this opportunity as I often trade my unreleased music with the artists I like to play in my DJ set. Thus giving my The Skragg set a slight edge. The shelf like of that exclusivity is short lived however, because it doesn’t take long for those tracks to get released.

How can these issues be resolved? Should party-goers become more active?

Well, I think that the artists as a whole need to get organised. The trance scene in Cape Town is regarded as one of the best in the world if not the best. Most of the service providers that make these events possible are already very organised and make the whole thing operate like a well oiled machine.

I think an artist management agency is way overdue. We want to create an association, completely transparent, operating on a set of guidelines agreed upon by everyone, run by an objective professional – someone not associated to the trance industry, but rather the music industry. I think the public will decide for themselves.

Thanks for the interview! Any last words?

Thanks to Psymedia for the opportunity to do this interview, a massive thanks to all my fans both in Cape Town and abroad. Without your support I might have packed it in a long time ago. A warm hearty shout out to all the people that contribute towards making our scene as special as it is.