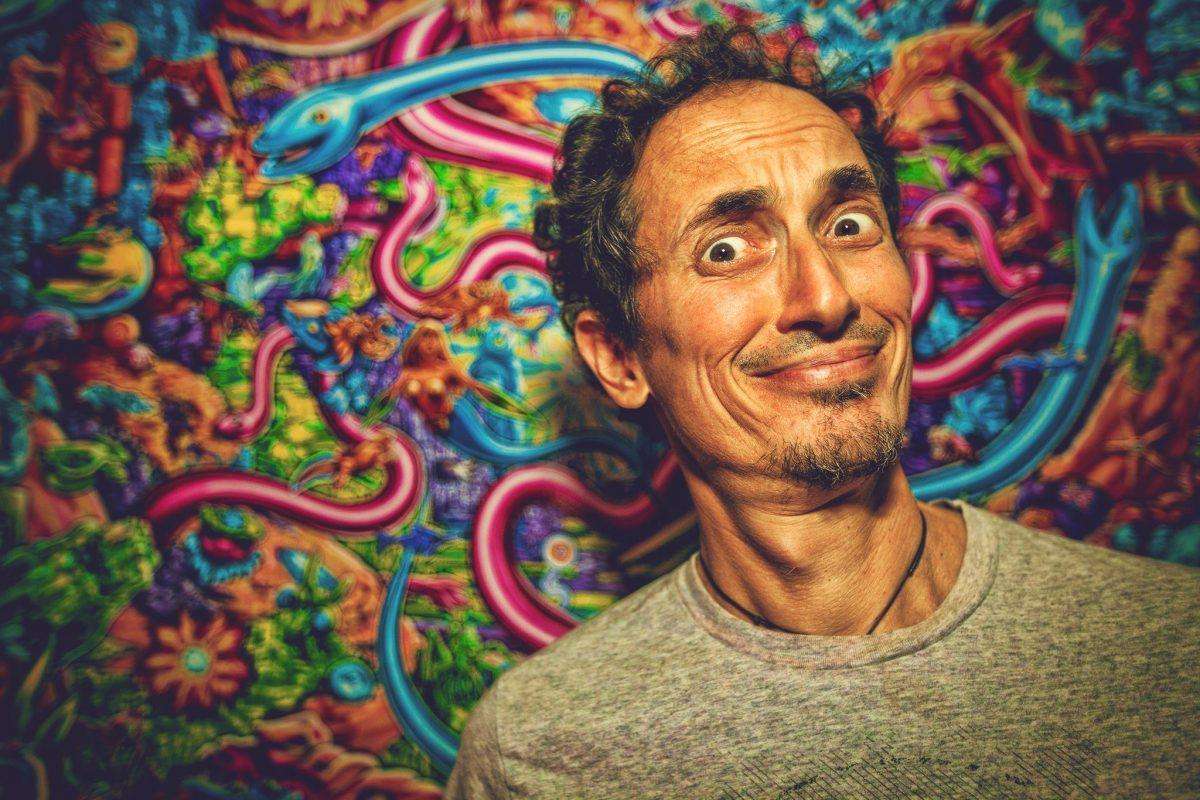 Perfect Stranger is the solo project of Yuli Fershtat, an eclectic Russian-born, California-based, Israeli musician. He first became known for his alias BLT, but the real game changer was Perfect Stranger in 2005 – a fusion sound incorporating elements of Psytrance, Progressive and Techno.

Hey Yuli! You’ve been around the block, to say the least. Tell me about how you came across Psychedelic Trance, and the formation of your first project, BLT.

I was aware of Goa Trance before 1992, but never gave it much attention. There was no such genre as Psytrance at that time, and also the ‘Goa’ music’ was just developing into what made it quite famous, 2 or 3 years later. I travelled India and Nepal in the second half of 1992, and spent a couple of months in Goa. That experience changed my views about the music, and made me a so called ‘fanatic’ of the genre.

The project BLT  was started because some close friends of mine claimed I needed to make Trance music, and for my 27th birthday they got me a Yamaha CS1x synth. I had no choice but to get some more gear and see what can possibly happen if I write music.

You still play and produce as BLT sporadically. What eventually caused you to focus your effects on Perfect Stranger? In your opinion, was the Goa sound losing its way?

I was in good working relations with Iboga Records since my second BLT album on Hommega (Presence, 2000). That was the last album released on vinyl through Cosmophilia distribution. From there on there was no vinyl option, and Iboga Records apparently liked my slower efforts. I had two or three slower BPM tracks on each CD I released.

They decided to take over the vinyl part from there. Soon we started releasing exclusive material too. Around 2004 I felt that I need to do something with my life financially. I was doing well, but thinking of the future that wasn’t good enough.

BLT vs Danni Makov was very successful in Israel, but didn’t manage to get a steady grip on the international circuit. So I actually quit, to give way to my actual profession that is Acupuncture.

A few months later the Iboga Records boss, Banel, called me and we had a talk. He was wondering why I wouldn’t I play around with 135 BPM and slower tunes. So I tried, and never became a doctor!

Back to the last part of your question – I never made Goa music. As much as I liked it at the time, and like some of it still, I never made one Goa tune. If I had to say what genre BLT stuff belongs to, it would be probably Progressive Psy from day one.

Tell me a bit more about working with Danni. Have there been any other musicians (outside the electronic scene) that you’ve worked with?

Danni has contributed immensely to my creation as BLT and as Perfect Stranger. For those who are not familiar with him, he is mostly known around Israel. Danni is probably one of the three biggest drummers in Israeli Rock n’ Roll Hall of Fame. The dude has been playing everywhere and with everyone, and participated in some of the greatest Rock albums that have come out of Israel in the last 30 years or so.

I would say that working with him brought me to a completely new level of understanding the ‘groove’ and the ‘feel’ of how I should make my tracks sound, as their groove section is feeling almost ‘live’ played. Danni was the only partner outside the electronic scene that I participated in the creation process with, as far as I can remember, but that may change.

How did you go about selecting the alias Perfect Stranger?

It’s a really good name, huh! I just happened to like the name a lot because of Sandman’s Goa Trance track released in the 90’s, and also being a Deep Purple fan I knew that name before.

It always rang a bell for me, so that was my chance to grab it. I am still quite surprised it was vacant for so long.

How has progressive psy changed since you started playing it?

That is a tricky question, and I will be as honest as I can be, yet at the same time politically correct. It’s way too commercial what they call ‘Progressive Psy’ today. I personally have very little to do with it. See, when almost 10 years ago I (and Ace Ventura, for that matter) switched projects, we did so contributing quite a bit to the genre, broadening its accessibility and boundaries.

We joined the squadron of various Progressive artists with a sound that was unmistakably their own (Atmos, Vibrasphere, Liquid Soul, Frogacult, Phony Orphants, and Beat Bizarre to name a few). There were many, many more. It was awesome – there were so many different directions and it was sounding so fresh at all times.

Today it seems that almost every Full On act has a ‘Progressive Psy’ side project that soon becomes their main – not that there is anything wrong with that! But it looks like in most of the cases, instead seeking to break boundaries, we witness just endless variations of killa Kick n’ Bass combos, with hands-up-in-the-air 3 minute long breakdowns, that remind most people of all Full On, simply 8 BPM slower.

Of course not everyone that left Full On genre in last 2 – 3 years is on that list, but the phenomena is too wide to disregard it, and if we get back to your question – if that is what you meant by Progressive Psy, then I guess it has changed, not for the better.

Tell me why you’ve done a remix competition in the past?

Well, I didn’t want to do that in the first place to be honest. I felt it might consume too much of my time and I was right on that side of things, but only on that side.

Although it’s not likely I will do this again soon (as it is indeed time consuming), it was an amazing experience, that let me see how different people ‘hear’ my music and how it inspires them to make something different, sometimes way more amazing than my own creation.

I was astonished and speechless to witness some of the remixes – please bear in mind, we are speaking about amateur producers with very little experience on the dance floors and in production. Some of them literally blew me away.

Tell me about your label, Digital Structures. How did that happen, and what’s it like running a label in the digital age?

I am a sole owner of Digital Structures for a few years. I think it was natural for me to seek and release music that I like. My taste differs from the trendy stuff, so it’s nice to have a label that releases music that I can say I am supporting 100% at all times and it’s not heavily genre bound.

It’s just good, electronic, psychedelic dance music. That’s what it is. Also I feel that it’s a bit of a ‘duty’ to let some hidden talents come through, and do it without too much bureaucracy and hard times they might have encountered otherwise trying to push it forward.

Running a label like this in the digital age is a pain in the ass and very bad business decision. I have no sufficient reasoning for doing so apart from the ‘karmatic’ one explained above.

Does each festival have its own touch?

Yeah, most definitely. Crowds taste and behaviour is different from place to place. It’s part of the “art” of DJing. To be able to feel those differences, sometimes they are really subtle and you need to really dig deep. But it’s like a fingerprint – there will never be two of the same kind.

Thanks for the interview. Any last words before we finish off?