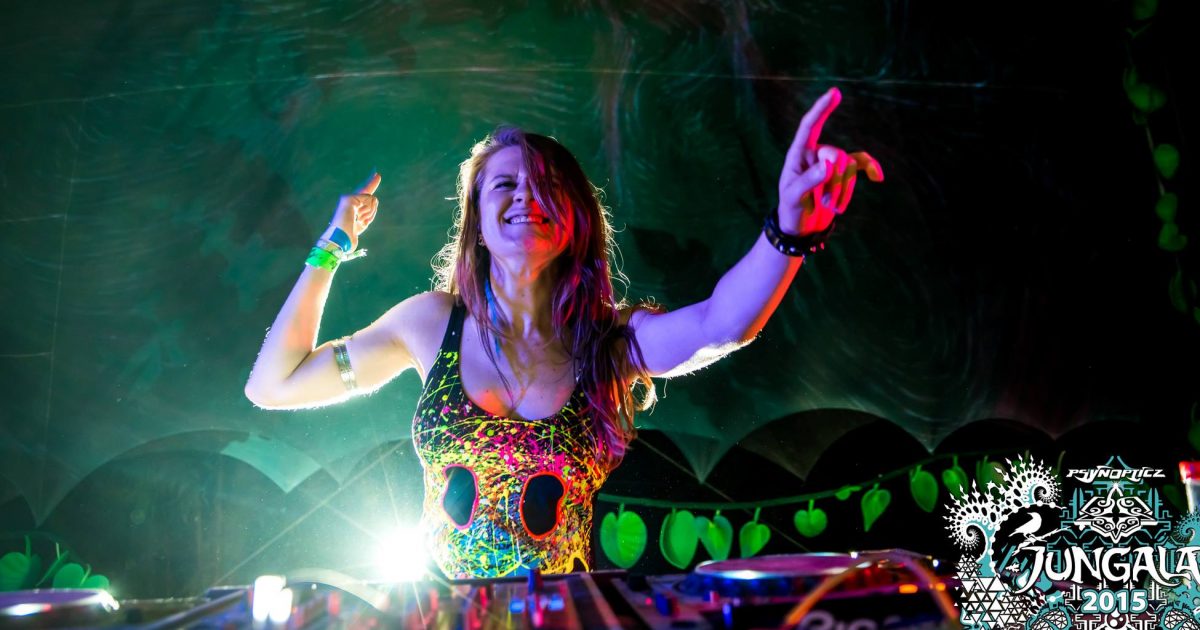 It's been exactly one year since her last visit to Cape Town, but Nica's growth as an artist has been exponential. She's relocated to Berlin, enrolled in various schools to expand her knowledge of music, developed new inspirations, and tweaked her sound to better represent herself.

Israeli artist Iliuchina returns to South Africa this weekend to perform at Twilight Open Air Festival 2013 in Johannesburg, followed by Zone Festival 2013 in Cape Town on the 2nd of November. It’s been exactly one year since her last visit to Cape Town, but Nica’s growth as an artist has been exponential. She’s relocated to Berlin, enrolled in various schools to expand her knowledge of music, developed new inspirations, and tweaked her sound to better represent herself.

Iliuchina : Back in those days I was usually partying at a Hip-Hop club that also happened to have a Psytrance floor. One day I decided to check it out, and shortly after I went inside I had numerous flyers from various Psytrance promoters. I decided to try one of them – it was an outdoor festival in Geney Huga (which featured in the video ‘Ganey Huga 97’). From the second I entered the festival, I knew that this was going to be my life. In 2007, I received money as a birthday present to obtain my driving license. However, without thinking twice, I used the money to find a teacher to teach me production and synthesis. To this day, I still don’t have a drivers license! When it came to picking an alias, it was pretty simple. My last name is Iliuhina, I just twisted it a bit to make it a little easier to pronounce. The only problem is that I didn’t notice the country ‘China’ in my name.

Psymedia : Was it difficult to gain respect as a young female entering the Psytrance scene?

Iliuchina : It was not easy, although not particularly because I was a young female. I think it was due to my own mistakes. I started promoting myself when my music was not a hundred percent for me. This is a tip other young artists can learn from. Don’t put too much effort in promoting yourself, use the time to make more music and learn more things. I think if I put my music online when it was only 100 percent for me, the result would be different. Today, I feel the full support from everybody, and of course everything becomes music easier from there.

Psymedia : How has moving to Berlin, Germany made a difference to your career?

Iliuchina : Moving to Germany was the best thing to happen to me. First of all, it is much easier to travel from here to anywhere in Europe. My gig schedule has doubled. Secondly, the music scene in Berlin is so colourful and huge, it gave me motivation to do a lot of things, not only Psytrance. I am currently working with two other partners to finish building a studio. Our goal is to have a studio that will allow us to make whatever want, without any blocks in the way. I have met cello players, guitarists, drummers, double bassists and amazing singers. I think this is just the beginning of my music career.

Psymedia : So you’d say the move has impacted your music?

Iliuchina : Yes, it has already happened. I think my music has become less ‘dark’. A bit slower too, as I’m now working at 143-144BPM. I don’t know why it happened, maybe because the scene here is different and I’ve been influenced by other styles of music. The Berlin scene is colourful, I’ve been to shows I thought I would never attend. Chill Out Drum & Bass, Techno, Tech House and Experimental live shows. Berlin has opened me to music I have never heard before. It’s something other people can learn from, too. Everyone should go to concerts or events you never thought you would attend, the craziest ‘not you’ music. The results will be interesting!

Psymedia : You’ve recently enrolled at the SAE Institute Berlin. How do you think the training might help develop your sound, even though you’ve produced alongside experienced artists?

Iliuchina : You did your homework, I see! When I enrolled in SAE Institute Berlin I thought I was a smart ass,  but apparently I don’t know anything. The world of sound is so huge, I don’t think I will ever stop learning, as the technology is developing every day. Since I started the degree, I also began online course from Berkley University. Currently I’m reading four different books about the subject, again, because I realized that this world is bigger than I thought. Sound is my passion, and it does not end with Cubase and Psytrance. The good thing about SAE Institute Berlin for me is that I will know how to work in an industrial studio and not only a home studio. We must always have a plan B in our lives!

Psymedia : A few months back you released an EP with Geko under the alias Totalyzers. Tell me about how you two work together, and will there be future releases under the alias?

Iliuchina : I have known Geko for a few years now, but we never really stayed in touch. But one day I got a phone call from him, he told me he needed to finish a track for some compilation but he didn’t have time, but he thought maybe we could work together to finish it quickly. As we sat down together in the studio, the music started to flow. I have never had such a great time working with someone as him. It’s hard to be with a person in a small room for many hours, but with him it was easy from the beginning. The sound of Totalyzers is different from our solo projects, that’s what I love about the project.  Instead of one track we finished three, and released it on Fractal Records.  Our second EP will be out soon, and our first live show will be in Switzerland in February for a Fractal Records party.

Psymedia : A few of your releases have been made available as a free download [after being available for purchase], most recently Apoclypse Now on Kaos Krew Records. Do you think free releases are the new direction? How is it beneficial for your career?

Iliuchina : I usually release my EPs for free after six months or more when I am able to find it online [illegaly] in high quality such as FLAC and WAV. Currently the people buying music at release date are winning, to have it exclusively, particularly DJs that want to have it exclusively to play in their sets. The sales from Psytrance music are getting lower and lower. Piracy is getting bigger and bigger. Sometimes I feel it is useless to sell my music, but this is how the industry works. If you want to be ‘on the list’ you must have your music in this or that store as well – those unwritten rules. A lot of people don’t agree with me, but as I see along the way they are also starting to release their music for free at some point after a certain duration. It’s useless to sell when a short Google search away you can find it for free. I mean, come on, if you write in Google: Iliuchina – Apocalypse Now, the first option is iTunes, and the second is a blog with free WAVs. What would you choose? So when it gets to that point, I feel the need to give it for free, if the label agrees, of course.

Psymedia : Tell me about your upcoming EP on {psy.ology} records due next month?

Iliuchina : This ‘new sound’ I was talking about, the way Berlin changed me, a small taste of it will feature on the ONE EP. The EP is psychedelic dance floor music for me, which I just discovered. My wish is to develop it more and more. Less dark sounds, more melodies and more grooves. I think the European Full On style influenced me particularly, but I twisted it with my style.

Iliuchina : The first sound bank was only for promotion, I didn’t have any releases for a while, and I thought how can I bring my name up again? But the comments I received after were inspiring, a lot of people wrote to me to tell me how I helped their production, and got amazing comments from artists I thought would never even download it. That’s what brought me to the second sound bank. The response was even bigger and better. So the next thing that I’m currently working on is a website with sound banks for different plugins from different artists. It will not be free, but not expensive. I need to return something to the artists that work on the banks for me.

Iliuchina : For me the South African scene is the biggest and the best. I grew up listening to Artifakt, Shift, Twisted System, Deliriant, Zion Linguist, Rabdom L, Phyx and many more. My biggest influences were South African artists. Like a teenager listening to boy bands, I was listening to those psychedelic sounds and dreamed one day I could make it as well. When I got the chance to work with some of those artists, I swear, it was a dream come true. When I landed in South Africa last year and arrived at Zone Festival, I could see how much the crowd supports the artists. Even though they hear their sets a few times a year, it was as if they were hearing it for the first time. Don’t take it for granted, it almost doesn’t happen anywhere else in the world. I was amazed! I understood why those artists make this music and continue on the same line of sounds, what they love, and don’t change it every year according to what is happening in other countries. For me South Africa has the biggest scene, the most inspiring, supportive crowd, and the most creative artists.

Iliuchina : Zone Festival 2012 was only my second international gig, and the second time I ever played a live set in my life. Since then I have attained more experience, developed my live set a lot, more music to play, and more variations. This time I feel I can really tell a story in my set, and give the crowd the experience I wish to give.

Iliuchina : I’m currently working on my debut album, which I finally feel ready to do. It will be released on Spectral Records in 2014. I can tell that with the new studio and the new equipment I never had, this album is going to have a fatter and bigger sound, pure psychedelic sound and some interesting collaborations. It will be a bit different from what I used to do, but I have a good feeling about it.

Psymedia : Thanks for the interview! See you at Zone Festival 2013! Anything to add before we finish off?