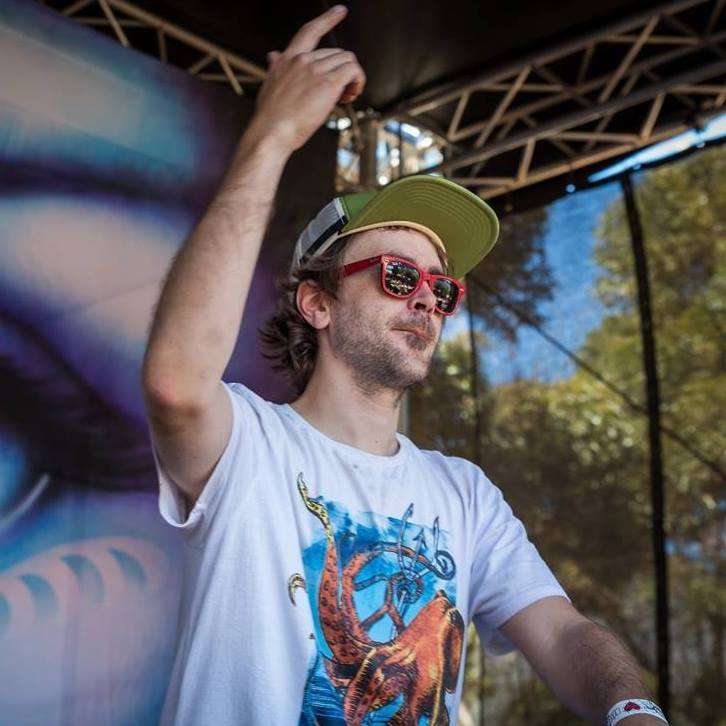 From humble beginnings in 2008, Dash has built up a reputation in the local scene for his crisp night time beats, seamlessly blending a broad number of genres. His dedication to constantly reworking and refining his sound has lead to Glitch picking up a number of high-profile gigs this year including the upcoming Rezonance NYE Festival 2013-2014.

Glitch is the solo project of Dash Hawkins. From humble beginnings in 2008, Dash has built up a reputation in the local scene for his crisp night time beats, seamlessly blending a broad number of genres. His dedication to constantly reworking and refining his sound has lead to Glitch picking up a number of high-profile gigs this year including the upcoming Rezonance NYE Festival 2013-2014.

Psymedia : Howzit Dash! To kick things off, tell me about your introduction to Psytrance. What drew you to Psytrance specifically?

Glitch : If my memory serves correct (not likely) it was Vortex New Years Eve 2004-2005. I was literally forced by friends to go with them, as I had no interest in the genre, mainly because I had not experienced it on a proper sound system, with that feeling of hundreds of people stomping all around that suddenly fills you with this amazing unexplainable energy. That is what grabbed me. I decided at that moment, that it was the music that I wanted to pursue, and began fiddling around with various music software the moment I got home. I always had a huge interest in music, specifically of the Avantgarde variety. I think this was first sparked when I was given an analog synthesizer to play on as a kid. I would say 2008 was when I actually started producing properly, I had just finished studies, and was ready to lock myself into a room for weeks, to discover what lay beneath the surface that I had been scratching on.

Psymedia : So it was the production of the scene that sold you?

Glitch : I feel Psytrance is so much more than just the music, its the whole energy and message behind it, similar to that fact that you can’t really fully judge a film by watching a low quality internet rip, ideally you want to see it at the cinema with friends.

Psymedia : How has your sound evolved over the years?

Glitch : I don’t think there is anything I can pinpoint, other than the growing resource of influences we have around us, whether it’s art, film or music. I try and draw inspiration from everything as well as broaden my horizons as much as possible in terms of the different genres I listen to.

Psymedia : How beneficial has formal training in theory and studying Audio Engineering at Cape Audio College been in your music production?

Glitch : For me the main skill I can attribute to them was teaching me the ability to critically listen to things. It’s one thing being able to craft the sounds, but for me 80-90% of the work comes after that. It’s the re-arranging, fine-tuning and ‘cherry-picking’ which takes up the large quantity of my time in the studio. It also gave me a broader understanding of the fundamental physics which make up the science of sound, which I feel is a necessity for anybody who wants to broaden their understanding of what makes up the sound-waves that come out of our speakers or headphones.

Psymedia : What’s the key to maintaining a signature sound? Was that a critical element for you, to try and differentiate yourself? What do you think you do that’s unique?

Glitch : Well, the whole idea for me is to create a signature within each track, a ‘hook’ so to speak. Something that differentiates the track from the rest of the set or album, while obviously still maintaining a certain degree of Psytrance elements. A favourite for me is using influences from different genre’s. I feel a lot of alternative electronic music genres often get overlooked by a lot of the general party going folk, and it’s also a way of satisfying my desire to step a bit further than the musical boundaries which have been laid out.

Psymedia : Tell me about signing with One Foot Groove. Was it an easy decision?

Glitch : When they first asked me, it was an open and shut case! It is a dream come true to have my alias up amongst some of my biggest Psytrance influences. I think this is just the beginning of an awesome partnership.

Psymedia : You’ve released two albums, your latest being Tales from the Script. How might your upcoming album on One Foot Groove differ from your previous work?

Glitch : Well, I have concentrated on creating something more focused and refined. I dabbled a lot more with the music theory side of things, although still much to be discovered there, creating different chord structures and scales for each track. I also started working with tempos slightly slower than I was used to, while still trying to maintain the ‘edge’ of Twilight and Night Time Psytrance

Psymedia : Both your albums were available for free download on Ektoplazm through Ritual Records. Do you think free releases are the right direction to get your name out there? How has the internet changed the ballgame?

Glitch : While on the one hand I think it is a great idea, it should never be seen as the easy option out. With the advent of widespread internet access it has become much easier to distribute music to the masses, but it has also created a slow decrease in the integrity of owning music. The pros and cons could be argued for days, but the fact is the future is here, and you the artist have to recreate that value in your music

Psymedia : What have been your 2013 highlights? What changes would you like to see in the scene in 2014?

Glitch : My 2013 highlights have been signing with One Foot Groove, playing Earthdance Cape Town, and getting booked for the upcoming Rezonance NYE Festival 2013-2014. So far its been the biggest year for me, but who knows what’s in store for 2014! With regards to changes next year, all I am able to do from my side is to continue spreading a positive vibe and welcome all the new faces in the scene, just like when I arrived.

Psymedia : This will be your first time performing at Rezonance NYE Festival 2013-2014. Being a Cape Town resident, was that a goal early on in your career? What can the dance floor expect from your set?

Glitch : Definitely a huge milestone for me! This was the party that first got me into Psytrance, so it’s an honor to be able to pass that energy on to anybody who might be where I was 9 years ago. The dance floor can expect the usual mash up of remixes and alternative break-downs, alongside a whole host of fresh sounds waiting to be unleashed!

Psymedia : Thanks for the interview! See you at Rezonance NYE Festival 2013-2014! Anything to add before we finish off?

Glitch : Thanks for having me! I always love supporting what you guys do at Psymedia. Cant wait, see you all on the dance floor!