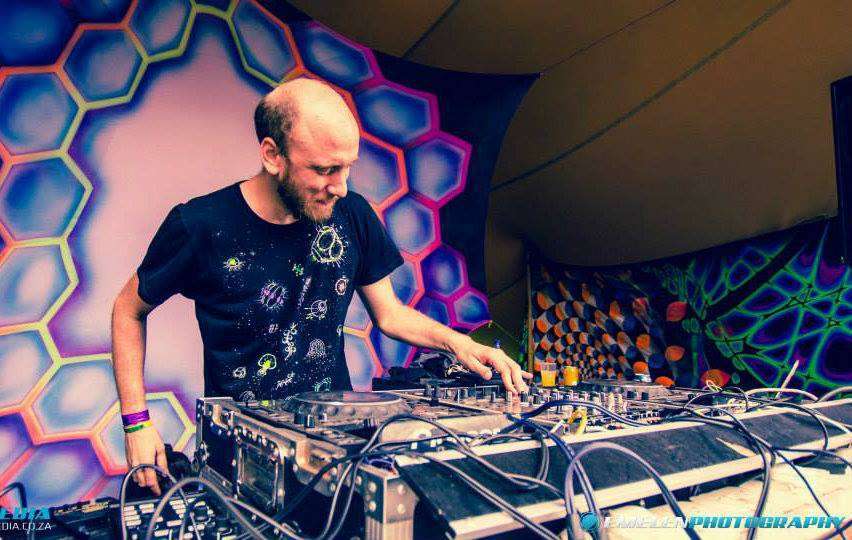 Celli (Earthling) has been a hot name in the psytrance scene for well over a decade. Although based in London since 2004, Celli’s love for psytrance originated from his home, Ibiza. With a new album out this year, a busy touring schedule & managing Zero 1, Celli is always working on something music-related. We had a chat with Earthling in-between his appearances at Ozora & Boom.

Psymedia : Hello Celli! We’re catching you between Boom and Ozora; are those special bookings for you? How was Ozora this year?

Earthling : Hi! Yes, I just got back from Hungary last night. Ozora is probably the most special event for me, as it was the very first festival I ever attended. It was 1999, for the total eclipse of the sun, it totally blew my mind. This year, was hands down the best edition to date. It was such an amazing vibe and international crowd. Boom Festival is also one of the best parties in the world. I first went to Boom as a punter in 2000, and have been back to play in 2006 & 2010. May they continue for many years to come!

Psymedia : You released Interstellar Moonshine at the beginning of the year. Have you been playing it at festivals a lot? How has it been received?

Earthling : Yeah, Interstellar Moonshine is my 4th full-length album as Earthling. From the feedback I have received, people seem to like it! As an album, it ranges from slower daytime trance, to more gritty and fast night time stuff. I’ve had the chance to play all the tracks at some point; depending on the time of day I get booked to play.

Psymedia : You’re one of the guys behind Zero 1 Music. Do you feel having your own label has been beneficial? Have there been obstacles?

Earthling : Creating Zero 1 Music was the best idea ever. We have amassed a bad-ass team of highly talented, fun-loving reprobates. It allows us to behave however we want, without feeling as though we are tarnishing anyone’s reputation but our own! Not to mention, the fact we have complete control over our own music, artwork and public image. The only obstacle, I would say, is the fact that are always touring or working in the studio, so, things can move a little slower than we would like.

Psymedia : You’re originally from Ibiza. What’s the psytrance scene like in Ibiza now and what needs to happen for it to grow?

Earthling :  I have been living in London for the last 6 years, but last time I checked the scene wasn’t doing very well in Ibiza at all. For it to grow, the big discotheques need to give us a break and realise that we aren’t stealing their clientele.

Psymedia : Are you still releasing as Everblast alongside Chromatone?

Earthling : Absolutely. I see Lawrence Chromatone about 4 times a year, and so we get to make about 4 tracks a year. Lately, we have been meeting in Goa and getting most of our work done there. Expect some big releases in the next couple of months.

Psymedia : You’ve also got a release coming out with GMS, under the moniker Soundaholix. The 3 of you have a long history; can you tell me about that? How is producing together nowadays different from early on in your career?

Earthling : Yeah, I’ve known Riktam and Bansi since we were kids. We got into this music at the same time, growing up in Ibiza, going to crazy parties in the 90’s. I guess the main difference, producing nowadays, is that the technology has come an awfully long way, making it easier to get our ideas across and express ourselves. Also, we now have a better idea of what we are doing, and understand the machines a lot better.

Earthling : Cape Town parties are always exciting for me. I’m not exaggerating when I say that I’ve been looking forward to this trip all year. You guys [Capetonians] are serious trance lovers until the end. In my live set, you can expect a mashup of Earthlings tracks spanning the last 10 years. For the DJ set, well, that’s a surprise!

Psymedia : Thanks for the interview. Anything to add before we finish off?

Earthling :  Thanks a lot. See you on ze dance-floor. One love!