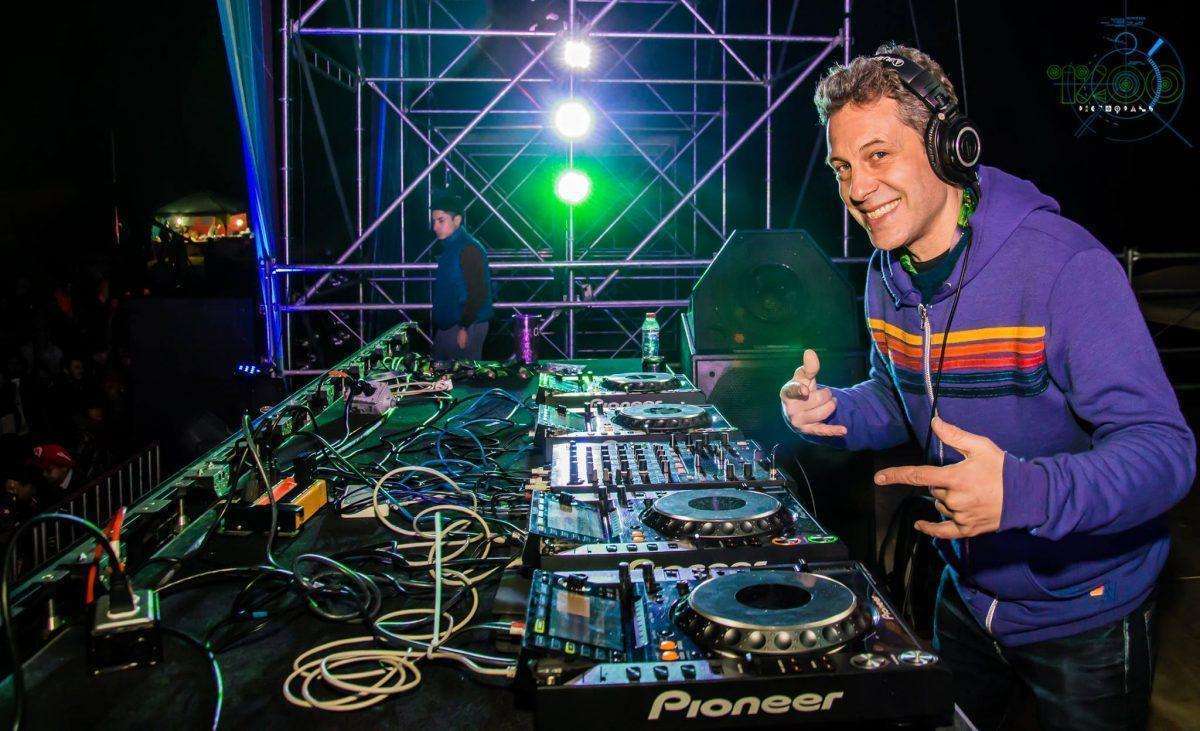 UK based DJ and producer Lucas O’Brien has been rounding up dancefloors and rocking them in the right direction since he started playing techno in the early nineties at renowned London clubs such as The End, Heaven, Club UK and Fabric.

His trance-infused techno music was found to crossover with the sounds being played in Goa in the early 90s and it was this that led him to an opportunity to play at some of the early, now legendary, TIP parties.

Psymedia : You’ve been a veteran of the scene for two decades now. What was the scene like when you started? Tell me about the transition from techno to psytrance?

Lucas : Hi Psymedia! In the early days it was new and fresh and the parties where buzzing with excitement. I’d never seen anything like it before. Electronic dance music brought about a social revolution. I started playing Acid House at warehouse parties before moving into clubs. In the mid 90s my friend Rich Bloor, still our label manager at TIP Records, recognised that my style of techno trance music would crossover into the Goa scene and he got me a spot at one of the amazing early TIP parties. I’ve never looked back!

Psymedia : You’ve been affiliated with the legendary TIP Records for a long time. Are record labels still important today?

Lucas : We have a great team and we’re all good friends, so working together is a joy. Traveling with Raja Ram is always amusing, he’s a great entertainer! It’s hard for labels to survive now due to the decrease in income from music sales. To survive they have had to adapt to the changes. Most labels have a distinctive style which can help fans find the music they’re after. Also, labels are a great platform to help launch new artists.

Psymedia : You occasionally produce as DJ Lucas and collaborate with Ric Featherstone as Sybarite. When do you feel the need to produce? How do these two projects differ as a creative outlet for you?

Lucas : I’m constantly inspired by all the places I travel to, the parties and festivals, music of all kinds and, in particular, musical instruments old and new. I have a collection of vintage synths, each with it’s own style and sound. I have also started getting the soldering iron out and making my own. I like working by myself but nothing beats working with your best mate doing what you love!

Lucas : It does seem that these days it’s more likely that someone will download a few tracks from an album rather than the whole thing. I think it depends on the album. As a DJ, if it is just 10 psytrance bangers then it makes sense to just purchase the ones that you might play. However, if it’s an album where the artist has really thought about the flow and the concept behind it, then you’ll miss that if you don’t listen to it as a whole. I’m currently working on a compilation for TIP and also my own artist album, hopefully both out this year.

Psymedia : What was your experience like at Cape Town trance parties?

Lucas : I had a fantastic time. It was a top production and a rocking dance floor. I feel like I’ve been missing out all these years! It’s a beautiful place and a developed psy scene with lovely, friendly people. The decor by Artescape was unbelievably beautiful!

Psymedia : Why are you excited to be back for Vortex so soon? Are you even more enthusiastic that you’ll be with Raja Ram this time? What can the dance floor expect from your set?

Lucas : Raja Ram and I are super hyped to be coming to play at Vortex. I suspect Raja is going to love it. I have been in the studio a lot recently working with Avalon, Laughing Buddha, Space Tribe, Martian Arts, Mechanimal and some new Sybarite stuff with Ric. I’m also armed with many new tracks for my forthcoming compilation.. can’t wait to blast these out.

Psymedia : Are there any other countries you haven’t played in that are still on your to-do list?

Lucas : Sweden was one of the places I’d always wanted to play and I finally did last weekend where we had a TIP party with 1200 Mics and Raja Ram. Still on the hit list is China. A friend runs a label there called Goa Productions so I hope to come over soon. I’m always available for any parties on a tropical island!

Lucas : I already mentioned my compilation forthcoming on TIP, that one is just about ready now. I’m hoping to finish my artist album by the end of the year. I have several collaborations planned, a few remixes (a couple of which are of well known classics) and a Sybarite EP in the pipeline.

Psymedia : Thanks for the interview, see you at Vortex! Anything to add before we finish off?

Lucas : You’re welcome. I just want to add that Raja Ram and I are very excited to be coming and it’s nice to know that we won’t be the only veterans of the scene there, Vortex is also in it’s 21st year of existence! See you soon!