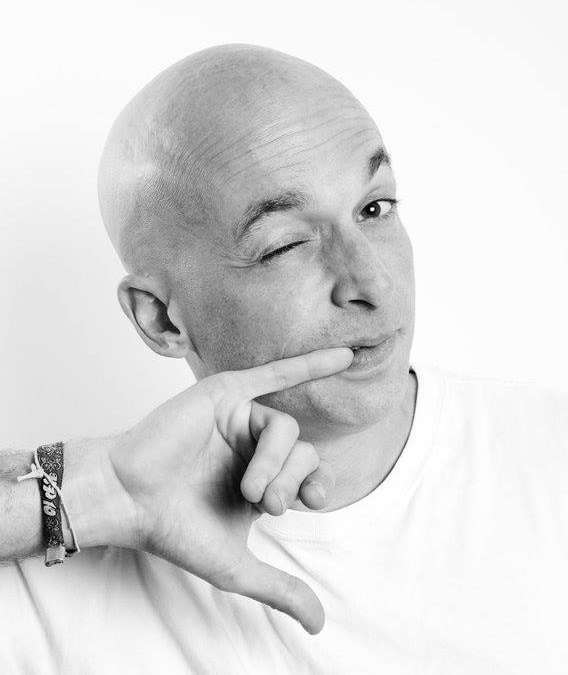 Dick Trevor has been around the block, to the say the least. The UK psychedelic veteran has been involved in a number of pinnacle projects spanning two decades. Green Nuns of the Revolution in the 90’s, then moving on to his solo project Dickster, working with Shpongle, Circuit Breakers alongside Burn In Noise, and AMD alongside Aphid Moon to name a few.

Hey! To start off, tell me a bit about your background, before the formation of Green Nuns of the Revolution?

I was always interested in music, having been in a band at school and learnt various instruments whilst I was growing up. After leaving school and working in a couple of jobs I went to art college and was intending to go into graphics and illustration. One of my art teachers, who I used to hang out with, introduced me to a course in sound engineering.

I decided to drop the art and head into music. I figured I wanted to be a sound engineer/producer in a professional studio working with all kinds of music. So I started working as a tea boy and tape-op in a large studio in London whilst meanwhile going to raves and festivals on weekends which got me turned on to dance music (which I’d hated at the beginning). After working there for about a year I started the sound engineering course and during that time we started up the Nuns.

Yes, they did have a massive influence. They all used to put on trance parties almost before they were labels and I went to them all. Youth also had Butterfly Studios which was a professional but very alternative studio where he encouraged a lot of the early trance artists to make their music. No one could afford the equipment at the beginning so he used to rent out his studios at a reasonable rate (or for free) and all the artists from those labels used to make music there at the beginning. Butterfly was also a meeting place where lots of these people would come and hang out, it had an amazing vibe there, very special, very creative. As for which direction we wanted the Nuns to go in, we wanted full on, fun party music, as ridiculous as possible with a sense of humour – very high energy. Uneasy listening!

Green Nuns of the Revolution’s releases, such as 1997 full length Rock Bitch Mafia have become somewhat of a cult classic within the Psytrance scene. Why do you think it failed to gain mainstream attention? Was that the intention?

It was never intended to gain mainstream attention, it was purely written for our trance scene and the dancers we saw on the weekends, not with anything else in mind. Just what we loved writing at the time.

Tell me about your involvement with psybient project Shpongle. Simon Posford (Twisted Records, Hallucinogen, Younger Brother) was involved, who you briefly worked with under the alias Infernal Machines, as well as Raja Ram (1200 Micrograms, The Infinity Project member) who founded TIP Records. I believe they met at Martin Glover’s studio Butterfly Studios?

I’ve known Simon and Raj for years, since Simon was an in-house engineer at Butterfly. He’s also taught me a few tricks along the way! But when he wanted to get the fully live Shpongle show on the road he asked me to help prepare some of the tracks, which took a couple of painstaking months. After that, he asked if I could be on stage during the shows to be in charge of the computer and the onstage mixer adding in a few FX during the show. It’s been a fun experience working with a 10 piece live band. Last year I missed a few of the shows as I have been too busy with my own music but next year there are a few planned which I’ll be a part of. I also did one of the remixes on the Shpongle remix album under the name Western Rebel Alliance.

Having been a part of Green Nuns of the Revolution and Shpongle, do you wish more bands, or at least artists implementing instruments, would pop up playing psychedelic trance?

Yes and no! If they are good players then it can be fantastic, but if not, then it’s just a racket that can ruin some good music! As a performance, to watch, it is far more exciting than watching a couple of geeks behind a laptop with a midi controller (of which I’m guilty), but in the end it’s what comes out of the speakers. If people enjoy it, then job done. Sometimes people don’t want to watch a performance, they just want to hear music and dance but there are a few bands around now getting the live performance thing nailed so well done them.

You formed the project Circuit Breakers alongside Brazilian Burn In Noise. How did the two of you meet?

I’d met Gustavo (Burn In Noise) over the years in Brazil at Universo Paralello (an amazing new year festival on the beach in Bahia) but we really connected when he came to stay with me in London and we had a go at writing a tune together. It was very easy working together so we just kept meeting up in Brazil or when he was in Europe and writing more and more. We eventually got enough tracks together for an album, which took a while as we never had much time when we’d meet up. We made the first EP under our own names just to get people who knew Burn In Noise and Dickster introduced to our new project.

You formed AMD alongside fellow UK artist Aphid Moon whose earlier releases were also on TIP Records, Flying Rhino and Dragonfly Records. In 2007 your full length Bigfish was released, and then you guys were quiet for a while until 2010. Is that correct?

Yes, we’d get together occasionally to write a tune after doing Bigfish but never really released the music so we had something different for the live shows. We were also getting on with our own and other projects. AMD was never meant to be our main thing. But, yes, we eventually got an EP out – however one of the tracks is 3 years old. But that seems to be a bit of a problem, usually the music I release is about a year old, at least, by the time it gets out!

What are some of your other important projects that had a big impact on your career, including those outside of Psytrance?

A few years ago I did some work with Danny Howells, a pretty successful house DJ, under our own names and under the name Science Dept. This was more house orientated music which was a welcome departure from my usual trance music. We managed to make a couple of hits, even getting one in to the national UK Top 40 which it really wasn’t planned for!

We released music on John Digweed’s label, Bedrock, Deep Dish’s label, Yoshitoshi and on Renaissance, even some of our tracks were released on a few Ministry Of Sound compilations. We did loads of remixes for all sorts of people, the most commercial ones being Destiny’s Child and Madonna which was quite amusing for me at the time. Working with Danny was great as it was something very different for me and got me into a different angle of dance music as I’d felt I’d got a bit stale with my trance at the time.

Clearly you work well collaborating with other artists. Are there any ways to identify a good collaborative artist?

I’ve done loads of collaborations over the years and that’s the way I like to work, it makes the whole music making process more fun even if the other person has no clue about the technical side of making music. They usually have very fresh ideas and I just have to translate what they are describing into music. Working with others makes for a good time in the studio. It’s also like a tag team so if you get bogged down, someone else can hear it from a different perspective and get on with it. On my own I’m so fussy that it ends up taking ages to write unless I’m very lucky and on a good flow with it. A good collaborator is open minded and up for anything. People who keep saying ‘no, it should be like this’ should keep to writing by themselves.

What is your take on some of the more modern Psytrance artists? Are there any newer albums that have influenced you?

There’s some great new artists around, close to home from the ‘new school’. I love Sonic Species and Avalon who’ve both made large waves recently in the trance scene but I’m loving the slightly more underground Psytrance sound of Ajja (Peak Records from Switzerland) and Wildthings Records (Beardy & Co from the UK) and also Bom Shanka Records (UK). These guys are doing a welcomed, very psychedelic fresh take on it all.

Why has psychedelic music failed to attract large numbers in the UK like other genres?

Well people think that our scene is full of hippies and dreadlocks, and it is! The general masses don’t seem to like that so its fine by us!

When and where does your song writing primarily take place? How do you decide which ideas work best for which project?

By the light of a full moon, in my attic studio in west London. Seriously though, most of my work is done in my studio which I’ve had for 15 years now, so I know it very well sound-wise although I’m having a refurb right now, which is going to be a good change for me although I’ll have to relearn the sound of my room! As for ideas for which project, we just sit down and write and see what comes out at that time.

Have you noticed a difference in your production techniques in comparison to younger producers?

Yes, some of mine are pretty old school and working with some of the younger producers blows me away with what they do. But the old dog can learn new tricks and still teach a few! I had to relearn a lot of things when it became all computer based but a young Junya (Eskimo) helped me out on that! But the great thing is I feel I’m always learning new things and that keeps it interesting.

This won’t be your first visit to South Africa. What has your impression been previously?

Love it, always enjoy coming to Cape Town. It’s one of the most beautiful cities in the world and I have some lovely friends here, so it’s always very welcoming

I believe you’ve only started doing Green Nuns sets in the last few years? What can the dance floor expect?

Old school Goa! The sound quality can sometimes be a bit lacking as production and equipment has changed over the years but if you ignore that there’s a lot of good vibe in the music, so it should hopefully be a fun experience and a trip down memory lane for some of the older crew. In Israel they have been loving it for the last few years, the younger trancers there only want old music. They say they grew up listening to their older brothers and sisters music, so now they want to dance to it.

Thanks for the interview. Any last words?

Best Psytrance Albums of All Time