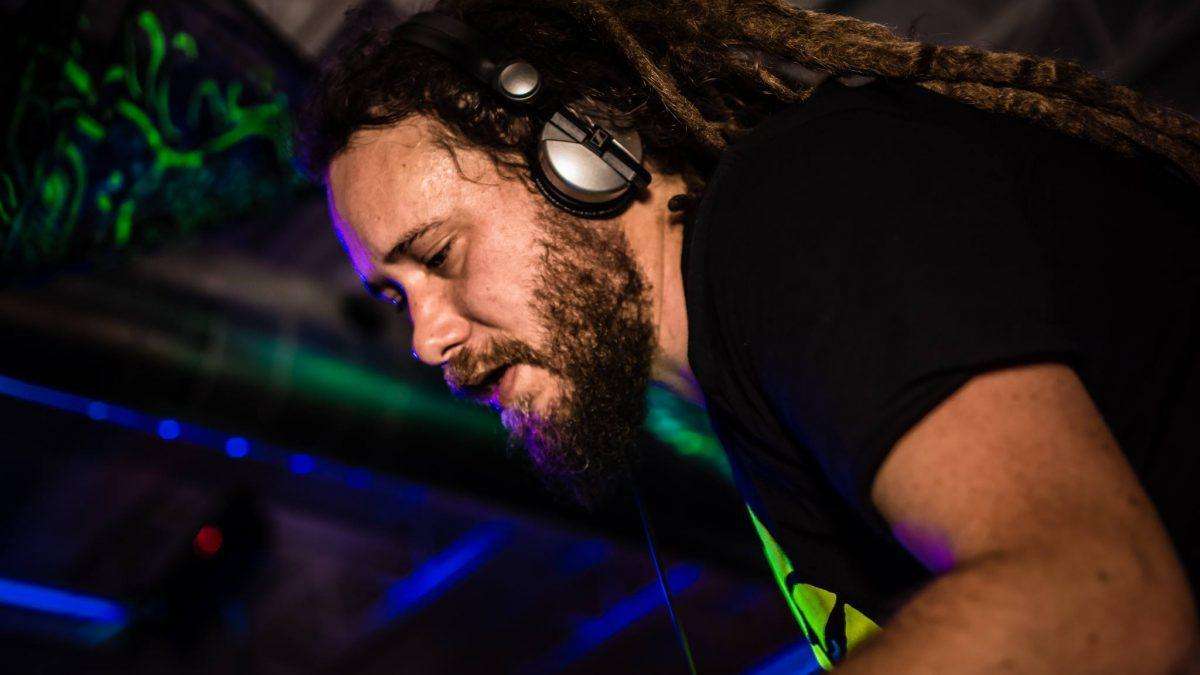 Daksinamurti is Till Kuhn, a German DJ and producer hailing from the university town of Marburg. Daksi has been heavily involved in the psychedelic scene for a number of years, and manages well respected labels Timecode Records and its imprint Sangoma Records. Last year he began producing under the alias Android Spirit, a collaborative project alongside fellow Timecode artist Tickets. Daksinamurti is no stranger to South Africa, having played here on numerous occasions.

Psymedia : Hey Daksi! To kick things off, tell me about your introduction to Psytrance? What was the scene like in Germany at the time?  What drew you to Psytrance ?

Daksinamurti : Hey! I’m happy to share my answers with you all, and thanks to Psymedia for having me! I have known about Psytrance (or Goatrance, as it was called back then) since 1997. Some friends showed me the music, but it was only two years later during a stay in Goa as a teen I really became interested. I returned home fully inspired and started to purchase and collect music. Searching for the sounds and feelings I witnessed in India. I started playing music for myself, with two Discmans, and during the time geared up to CD and vinyl. Since there was no local scene in my town, I had to teach myself everything. A couple of years later, the urge of sharing my taste in music grew bigger. Back in the early 2000’s, it was mostly progressive music being played at parties, and I was super uninspired by the monotony of some of the music and lack of soul and ecstatic moments I witnessed everywhere. I decided to kick up some dust by doing things different, and that was the start of a wonderful journey. It has taken me to many places around the world, including festivals such as Boom, Universo Paralello and S.U.N Festival. I never expected to visit and perform when I first began. Traveling, playing music, and being an ethnologist works well for me. I’m grateful to be able to experience the world’s diversity, which was and still is my biggest inspiration and source of creativity.

Psymedia : After a number of years performing as a DJ, you have started producing tracks alongside Tickets under the alias Android Spirit. What’s it been like working alongside Josef? What do each of you bring to the project?

Daksinamurti : Well, both of us bring in different musical perspectives, influences and a lot of experience that forms some sort of hybrid. As a DJ, my focus is to make danceable psychedelic music and after more than 10 years of playing, it is very nice to put my musical ideas into shape. Josef is one of the most talented musicians I have come across and it is amazing to see him transform these ideas into sounds. I have learnt a lot from him. His music is in a way harmonic, which comes from his musical background and you can also hear the dynamic pounding Timecode influence.  With Jo now living in Germany, it doesn’t get boring because there is always something to do and there are always people coming over from overseas for a visit. Max (Earworm) visited recently, and we had a studio session with him.

Psymedia : I believe a new album is in the works. How’s that going? Could you tell me about that?

Daksinamurti : Our album Synthetic Organism is finally complete and mastered by Scorb. Unfortunately Artifakt has stopped his mastering services. The artwork is being completed by Meskal from Portugal, and it should be sent off to our distributor before I head to Cape Town. It should be released in January next year. We wrote the album over the course of a year, including whilst we were travelling for events. It was written on three continents in fact, mainly in Marburg, Germany, but also in Cape Town, South Africa and Denver, Colorado. Our debut album will feature tracks with new Timecode talent Distant Touch, someone we’ve worked with for a couple of other tracks. Besides our album, we have music to release on Fractal, Digital Psionics, Sangoma, Forestdelic, and Phantasm to name a few. I think the music is very colorful, with different influences that inspired us and is suitable for night and daytime including some retro Goa elements, a good dose of South African twilightness and hypnotic grooves. Twilight 2.0.

Psymedia : As label manager of Timecode Records and Sangoma Records, what do some of your daily activities involve?

Daksinamurti : Deleting spam, answering emails and wasting too much precious time with unnecessary stuff. Running behind artists and filing out loads of paperwork is the most unpleasant part. On the other hand, it’s amazing to be able to create culture, interact with people all over the world and see visions materialize. For sure, it also involves listening to a lot of music.

Psymedia : What’s the hardest part about running a label today?

Daksinamurti : I think the hardest part is finding talented artists with good production and innovative ideas that are worth investing time and energy in the long term. In general, it’s annoying to deal with blown-up egos and attitudes within the scene. Some people act like divas, although they have rarely sold a few 100 units of music and think the world spins around them. Secondly, I’m allergic to superiority complexes of any kind, may it be eurocentrism, racism or people thinking they are better than others just because they listen to this or that style of music. There is hardly a functioning market for psychedelic music anymore, and we had to deal with a lot of unnecessary stress, losing our old distributor, and with it, most of our CD back stock. Setting us back didn’t really break our spirit, and we are happy to be more independent these days. Also, through our Timecode/Sangoma Records Bandcamp shop we have most of our 11-year-old catalogue available to buy and listen with full track samples.

Daksinamurti : Well, mostly it starts with a theme or idea that I have in my mind and it develops from there. I make a list of artists I wish to be on it, and it progresses from there. I also like to leave some spaces for surprises and new artists I discover during my quest. In the end, it really depends on the music, not so much the names. Good artwork and mastering, for us, is essential. Especially for Sangoma Records releases, as I round up the story of compilations with a text fitting the theme and I can embed my perspective as a cultural anthropologist. Making a compilation takes time and patience. In the end, the track list often looks very different from the original idea. Even if I’m not compiling myself, I always assist others, and if I come across a track I think would fit for a release (even if it’s not on my own labels), I’m happy to help.

Psymedia : I believe you enjoy playing longer sets. How does a longer set allow you to better express yourself artistically?

Daksinamurti : Yes, I love to play long sets. It is often a bummer to fly out long distances and only perform for an hour. It leaves me very unsatisfied, and is just a glimpse and a very compressed version of what I am capable of. My taste in music is very diverse, and it takes a bit of time and sensitivity to attach to the people and the surrounding, and then create something totally new, spontaneous and deep-magic being created at the very moment, which can go even beyond my comprehension. I particularly like to play a set during the transition from night to day, or vice versa. I prefer to play day time, so I am able to see and interact with the crowd better.

Ideally, I love to play 4 hour sets or even more. However, I am aware that at many festivals there is simply not enough time to do that. The more time I have the better. I can tell the story and create something new, I don’t have to shorten it or leave out important parts. It is not my urge to play the biggest hits or unreleased music (which in many cases, mastered or quality wise unplayable). I like and promote diversity, which is also reflected in our compilations and work with the label. I think every artist has more or less his own agenda on how he would like to create and perform in music. From my side, I have spent a lot of time during my studies to learn the effects of music and particular sounds to the body. During my academic career, I spent a lot of time studying shamanism, animism, mythology (real) trance states and a whole bunch of other concepts. I feel these ideas are reflected in the music I select, and it gives it a very organic and often spaced out touch. I can only speak for myself, but if I look back at the numerous parties I attended, it’s not because of the live sets, but the good DJ sets that remain in my memory.

Psymedia : What are your thoughts on the South African psytrance scene?

Daksinamurti : I think this will be my fifth time in South Africa and I always have a fantastic time. Having skipped a year because of a trip to Brazil, I felt something important missing. I love many aspects about being in South Africa. Being a young country, besides all the problems that exist, I feel a very open, uplifting and positive vibe in the scene with a lot of potential for the diverse rainbow nation. I am aware that the good party scene doesn’t come out of nowhere, it’s been the hard work of a few veterans to establish what we all enjoy today and it takes a lot of love, dedication and passion to create something like that. But that is not necessarily forever and it is fragile; the attitude and actions of a few individuals can affect all others, so it is important to keep the scene healthy and vibrant and eliminate negative and asocial influences. I like the raw full power energy of the parties and the mind-blowing beautiful venues. South African music has had a massive impact on the Psyscene in general and I hope that more people from abroad will come check it out and learn to love it the same way I do.

Psymedia : What can the dance floor expect from your set?

Daksinamurti : What music I play in the end depends on many factors like the time I’ll play and the energy on the floor. Usually I try to pick up the people, lead them to unknown realms and guide them back. It doesn’t really make sense to me to come down all the way and then play music, which can be heard in Cape Town all the time. I for sure have some goodies, which I’m already looking forward to play out, and which I think would work very well on a South African party. I have quite some music from our upcoming releases that I plan to unleash at the right moment.

Daksinamurti : I look forward to seeing everyone on the dance floor soon. Thank you for the support!