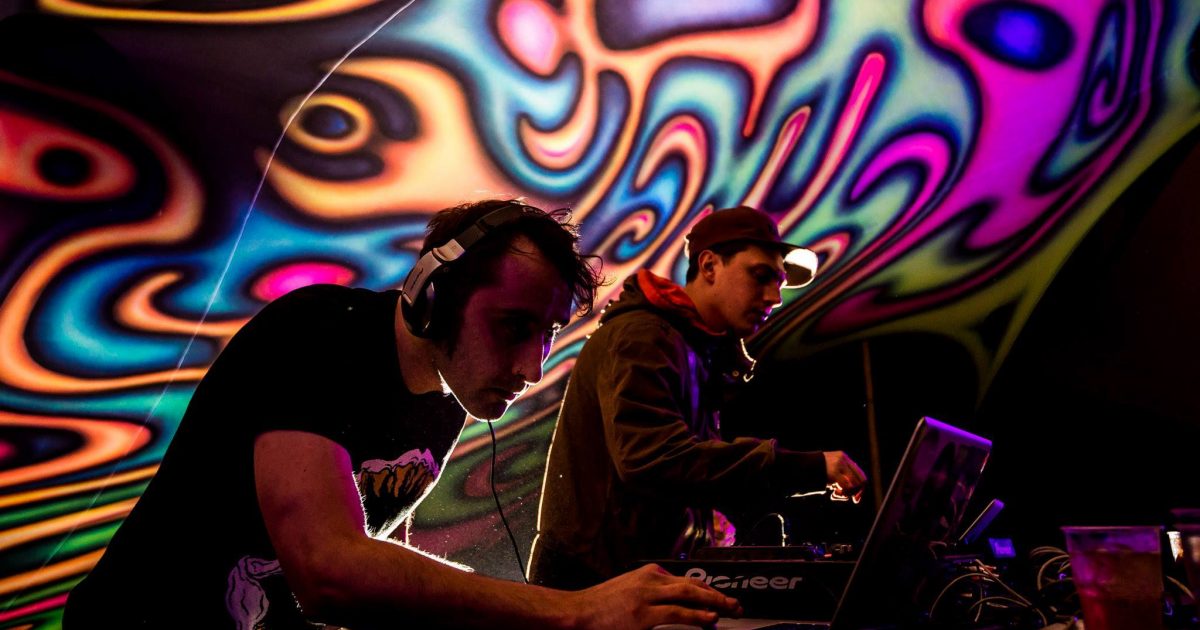 Antispin is a collaboration between Daniel Thomas and Hugo Rendell. The British duo started making music together as far back as 2007 but had their big break last year with their debut album Cropped Circles. Antispin and Sinerider (Daniel's solo project) are set to return this weekend, for Alien Safari Sprung, after bending minds at Alien Safari Flying Circus 2011.

Antispin is a collaboration between Daniel Thomas and Hugo Rendell. The British duo started making music together as far back as 2007 but had their big break last year with their debut album Cropped Circles.

Psymedia : Hey guys! To start off – take me back to your introduction to Psytrance?

Dan: Well, I got interested in DJing and used to mix Drum & Bass on vinyl back in 1999. In July 2000 I went to my first Psychedelic party in London and have never looked back. The outdoor scene at the time in the UK (with organisers such as Liquid Connective) was full of great people, plus the music at the time being amazing really got me hooked and I began to produce music with a friend in London in 2001. By 2002 I began a project with my friend James called Compressor. We released our first track on a Transient Records compilation put together by Dejavoo  and carried on from there. In 2005 I moved from London to Brighton and began the Sinerider project a year later. Then Hugo, who I knew from London parties moved to Brighton and we decided shortly after hanging out a bit to begin what would become the Antispin project. A lot of the reason being our mutual appreciation of labels like Ambivalent and the work of Scorb and Deviant Species.

Hugo : I live in Brighton but I’m originally from the South East of England. It was around 2001/2002 that I first started going to Psytrance events in Woodlands around Kent as well as warehouses and clubs in London. I loved the music and the people and was hooked from the word go! I finished my university studies in 2005 and moved to Brighton 9 months later. I was already heavily into mixing and producing, I soon after started promoting nights and helping a friend launch an Internet web label to help promote our own music as well as create a platform for other Psytrance artists to get out there. Antispin came about in 2007 after Dan and myself wrote our first track together. We worked hard towards making our first live set and our first international booking happened about 2 months after we uploaded our first track on MySpace.

Psymedia : Where’s the UK [Psytrance] scene at the moment?

Hugo : Like a lot of places the scene is consistently changing and evolving. London has still got a large amount of events happening in warehouses and clubs every weekend. The rest of the UK has many parties happening all over, although numbers are more intimate at events north of London. The last few years we’ve seen different sub genres of Psytrance almost create their own followings. Both Progressive and Forest styles are apparent in the UK at the moment, but there are also some great parties happening for Full On music too. Festival licensing has proven to be a bit of a hurdle for the trance scene in the last few years. With a few main festivals forced to stop running events due to increased policing costs and red tape. Still, there are some great parties happening over here and people are writing some great tracks. The scene is still very much alive and kicking.

Psymedia : Antispin’s debut album entitled Cropped Circles came out last year on Digital Psionics. How long did it take to put the album together? Is there added pressure to follow-up, considering the astounding reception it received?

Hugo : The album consists of tracks written as far back as 2007/8 when we first decided to make an hour of music together. We found it important to include some of the older tunes, mix it with newer productions and keep the whole listening experience coherent. This added some time to the process but ultimately we feel it was worth it. Other tracks such as The Chronicles of Dr Zoot Jangwaa and Isolations (with Scorb) were written right up to the finishing line just before we sent it for release! So I would say it took 4/5 years to put together alongside a couple of compilaton releases and an EP on Trick Music. Follow up pressure is not felt too heavily. We feel our production is still improving and new tracks should in theory be better and better each time. We want to get more stuff out as soon as possible and have several releases on the way that shouldn’t disappoint the true Spinners out there.

Hugo : That’s a great question! Well from our experience and personal preference I think getting the balance of elements correct is essential. Constantly evolving atmospheres and a selection of stab sounds placed correctly to really talk to each other. You can work adding layers forever but the secret is about how you remove and delete them! The space between notes is equally important as the notes themselves, it adds tension to a composition and creates an interesting listening experience.

Psymedia : What do each of you bring to the project? I believe you’ve got a bunch of toys incorporated in your setup – can you tell me a bit about that?

Hugo : I’m spending a lot of time designing patches and devices for use within Ableton. Generative music and creative use of midi fx. I might be using a new one I have made at Alien Safari Sprung using a Novation Launchpad. I’ve also been beta testing the soon to be released version of touchable for iPad. It’s a really amazing interface for controlling the whole of Ableton Live, amazingly intuitive and inspirational in the studio. We have both been using access hardware synths for a while now alongside Logic and Ableton and some software, our setups in our own studios are actually quite similar, this helps for working collaboratively. When it comes to what we bring to the studio table, although we both write quite different material when we write solo, when we write together we have a good understanding of what we are both trying to achieve. Understanding each others perspective and strengths. Working with someone else is a great way to learn new things, strengthen your weaknesses and importantly remove that bit of self doubt that sometimes slows you down from finishing a tune, it’s very simple, but if there is someone there to confirm your suspicions on a certain sound or an arrangement idea then things tend to flow much more smoothly.

Psymedia : Dan, I believe your debut Sinerider album will be out soon. How did the process of writing and putting together the album differ from Cropped Circles?

Dan : Yeah, the Sinerider album Pure Tones will be released on CD and digital formats from 24/7 Records later this year. It’s been a long time coming as I chose [with Hugo] to do an Antispin album first and has been several years in the making. The production process has been very different and more experimental as I attempt to put a little of all my favourite Psy genres in there. Being more morning sounding I had to use a lot more harmony and brighter sounds although I am sure some will recognise a similarity in the production of the tracks. It’s hard to escape your own sound even in different music. I would say a key difference is slower tempo and higher keys in the Sinerider sound. I also have a progressive project in the works called Divination which will launch its first releases also later this year.

Hugo : Yes, actually the last 3 months have seen my solo output explode. I’m currently wrapping up 2 live sets, one slower more Progressive groove based sound. The other is faster night time tempos. I’ve recently written enough slower tracks to completely replace all the tracks in my live set. It’s exciting stuff at the moment, but still in the finalisation stages before launch. So keep an eye out for Octognoma, the next few months should see some clips online followed by some releases. An EP featuring some of my night time stuff will be coming out on Replicant Records in the near future.

Psymedia : This won’t be your first time in Cape Town. How was your experience last time, and what can the dance floor expect from your set?

Dan : Our first trip to Cape Town was a total blast. We both had such a great time and were extremely close to extending our stay! Antispin set at Alien Safari Sprung will showcase all of our sound, all our favourites edited especially for you and including some tracks from our forthcoming releases. Sinerider will be a highly revised set showcasing a few classics as well as a sneak preview of the forthcoming album including a remix of Rinkadink‘s classic Anyone seen Bender?

Hugo : There are Antispin and Sinerider tracks being released on the new 24/7 compilation called Darklines 2, as well as a track from Antispin on a MMD / Replicant Records split release complied by Archive and Glacial. Sineriderr is also releasing a special collaboration track on the forthcoming Touch Tone album set to rock later this year, stay tuned for those.

Psymedia : Thanks for the interview. Any last words before we finish off?

Hugo : Thanks Psymedia. Big shout out and respect to all trance fans and we look forward to seeing you all.